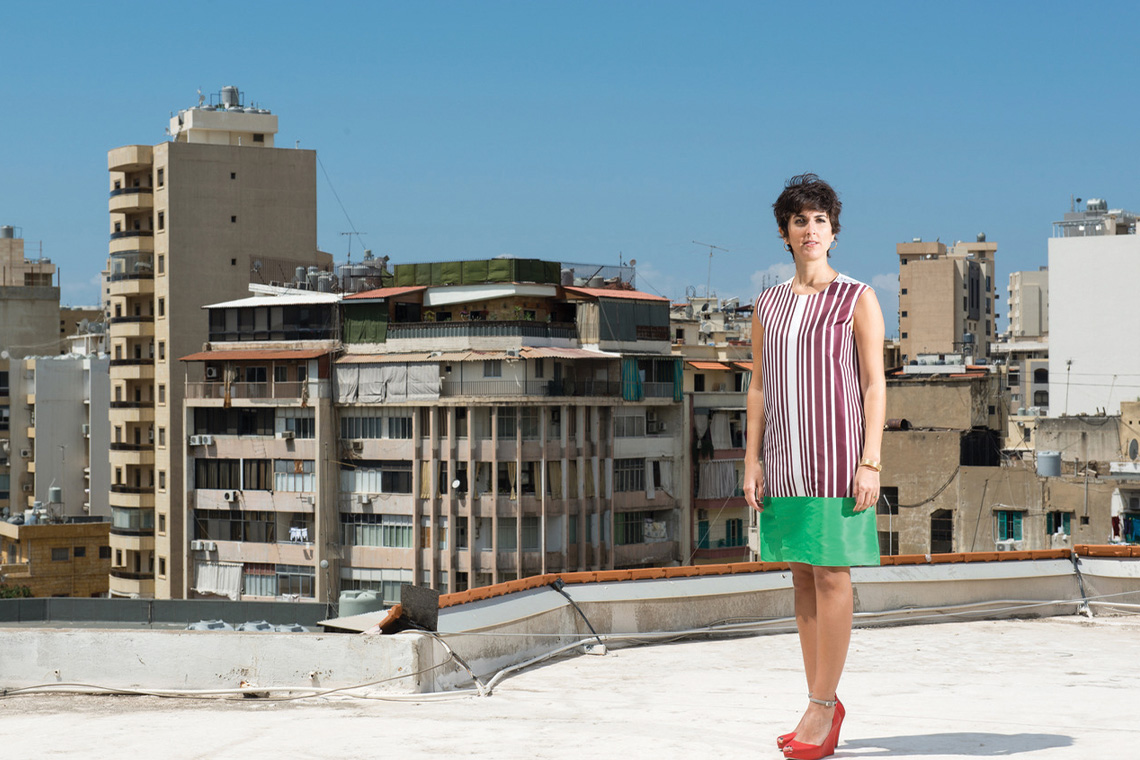 You may have heard of Amanda Abi Khalil recently when she created a participatory audio-guide with artist Annabel Daou for the National Museum of Beirut, inviting the public to give voice(s) to the artefacts in the museum’s collection and reimagine histories and material culture. Kevin Jones interviews the rising young founder of Temporary Art Platform, who has been involved in a slew of socially engaged, ephemeral art interventions that push the envelope by recontextualizing art in public space.

The first thing you need to know about Lebanese curator Amanda Abi Khalil is that she has a very specific definition of public art – one that’s not about monumental sculptures and murals. Instead, Paris-educated, Beirut-based Abi Khalil considers projects that are concerned with public domains at large, which could be anything from a threatened seafront to the hard copy edition of a daily newspaper, as ‘public art practices.’

“These spaces and non-spaces,” she explains, “are not associated with physical places or outdoor locations.” Beyond purely spatial parameters however, Abi Khalil’s brand of public art addresses very public concerns. From raising awareness about the endangered Dalieh coastline to reactivating a national museum crippled by dwindling audiences, the uniquely context-responsive slant of her practice makes it decidedly unorthodox.

Abi Khalil earned her stripes in two progressive cultural establishments: Centquatre (104) in Paris, and The Hangar, an independent arts space in the Dahieh suburbs of Beirut. Housed in a former undertakers’ building on the fringes of a relatively underprivileged Paris neighbourhood, the Centquatre has made community involvement an institutional raison d’être. Similarly, The Hangar – in the heart of a south Beirut Hezbollah stronghold – responded to its immediate environment under Abi Khalil’s directorship. “I combined my curatorial work for an artistic community hungry for discursive projects,” she recalls, “and the needs of a local community with very different expectations of what a cultural centre should be.” After three years at The Hangar helm, she made her own way and founded Temporary Art Platform (TAP) in 2014.

Abi Khalil frames the platform as an agile and independent force, operating solely “when funding, energy and ideas unite.” TAP’s maidenshow in 2014, InVisible, in collaboration with the Arab Fund for Arts and Culture (AFAC), was a Dubai-specific project purporting to disentangle what is concealed in the superlative-mad emirate’s cultural, historical and architectural context. In Vikram Divecha’s Boulder Plot (2014), for example, hoarding obscured a regiment of monolithic stones, each bearing a man-made hole, the residual mark of the quarrying process. Normally crushed to constitute the urban underbelly – often as bedrock for ersatz islands – the stately rocks were drafted into a haunting site, potent with a primeval force. 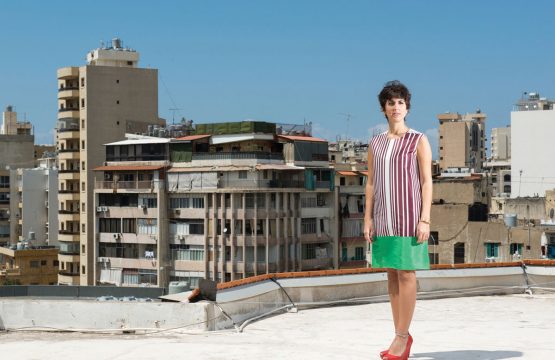 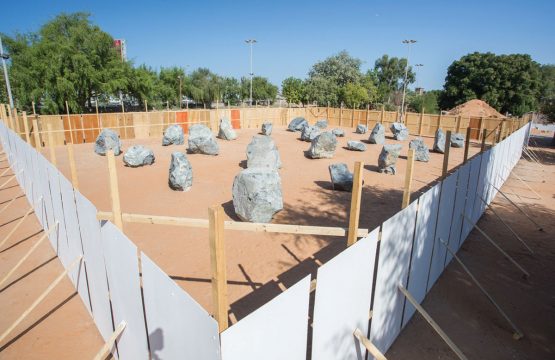 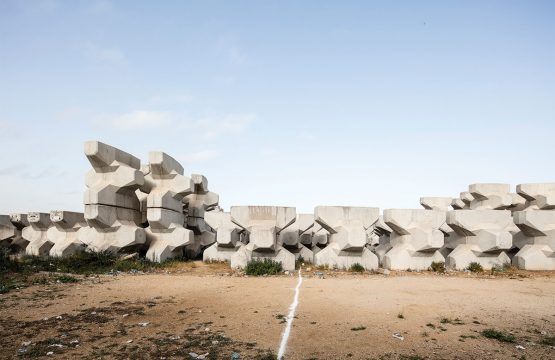 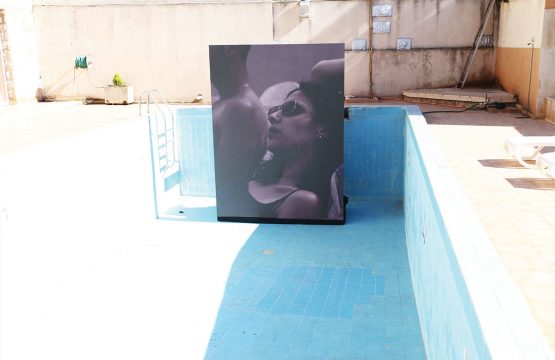 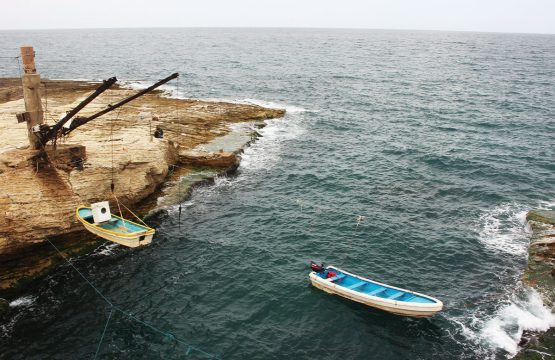 TAP quickly began experimenting with the artist residency as an alternative, perhaps less transient, form of engagement. Mixing site-specific commissions with participatory outreach, each of the three Lebanon-based residencies – Meziara in 2014, Ras Masqa in 2016 and Jezzine in 2017 – tackled a thematic social issue. “The residency,” Abi Khalil explains, “is a format that makes us think critically about the conversations contemporary art can still have with communities and society.” In Jezzine, for example, a southern town that since 2013 has been beleaguered by plans for the construction of a nearby dam, the TAP residency artists worked with the concept of water. Mahmoud Safadi’s Within Without (2017), for example, emptied the Auberge Wehbe hotel’s swimmingpool, filling it instead with a 10-minute single-channel video that raised questions about the (privileged?) accumulation of natural resources. Public art practices, in TAP’s hands, almost become a form of activism. In July 2017, Abi Khalil joined forces with the Civil Campaign to Protect the Dalieh of Raouche to raise awareness about one of the last remaining public spaces on Beirut’s coastline, slated for a Rem Koolhaas-designed luxury hotel. Here, passers-by heading to the Souk el Tayeb allegedly felt aggressed by IevaSaudargaitėDouaihi’s Thin White Line (2017), a demarcation line drawn in lime chalk. More aloof, On the Same Wavelength (2017) by Pascal Hachem and Rana Haddad consisted of a washing machine stranded in a fishing boat. The public space, far from being simply commandeered as a site of artistic production and display, became the very reason for the art’s existence.

Challenging this form of artistic engagement as public forum, Works on Paper (2016) was a series of interventions by 12 commissioned artists in four Lebanese newspapers – as-Safir, al-Akhbar, The Daily Star and L’Orient-Le Jour. While works clearly poked at preconceived notions of public space, they also raised tricky questions about history and civil society, most notably Sirine Fattouh’s Avis (2016) in L’Orient-Le Jour, a seriesof fake cancellations of cultural events, recalling spontaneous disruptions to public programming in the early days of the civil war. More particular to the history of print, Walid Sadek’s cross-sectional photograph of an open newspaper in as-Safir (which stopped publishing shortly after Works on Paper ended), references the previous generation’s relationship with today’s dying dailies.

Turning her attention to another faltering institution, the National Museum of Beirut, Abi Khalil developed MathafMathaf | Chou Hayda (2018) in partnership with APEAL (Association for the Promotion and Exhibition of the Arts in Lebanon), entrusted with promoting the soon-to-be Beirut Museum of Art (BeMA). “The museum wasn’t activated,” complains Abi Khalil. “The art scene never considered it as a place to engage.” She enlisted New York-based Lebanese artist Annabel Daou in a project that would interact with the materiality of the museum’s collection by using something entirely immaterial – sound. Daou, along with “the people of Beirut,” created an audio guide to selected works in the collection. “It’s somewhere in between an art project and an outreach tool,” boasts Abi Khalil. Stream the audio guide and you’ll hear the voices of this multifarious sampling of Lebanese (mostly museumfirst-timers) reacting to a given work with surprisingly political or poetic results. Ironically, MathafMathaf | Chou Hayda asks about the utility of the coming crop of Lebanese museums: why create new institutions when we can reactivate existing ones? When asked if she feels her practice has filled a gap, Abi Khalil retreats slightly. “I think we’re starting to build a solid community of artists and audiences interested in contextual art,” she says, cautiously. “But it’s hard to evaluate if there has been an impact.” If there is any gauge, though, of how TAP is moving the needle on public art, it comes in what Abi Khalil calls the “informal encounter.” She tells the story of Hussein Nassereddine’s installation I Invite Waves to Come (2017) in Jezzine – cinderblocks made of salt, left on a dried-out riverbed to disintegrate. Abi Khalil and the artist paid a visit to a local factory to have the blocks built, explaining the desired outcome to a Syrian worker who was confounded by the unconventional request. “We had a three-hour conversation,” the curator laughs. “But on opening night, he was touring people from Jezzine around the sites to show them ‘his sculptures’.” The conclusion? While waiting for giant leaps of awareness, the micro-encounter is perhaps the most telling sign of