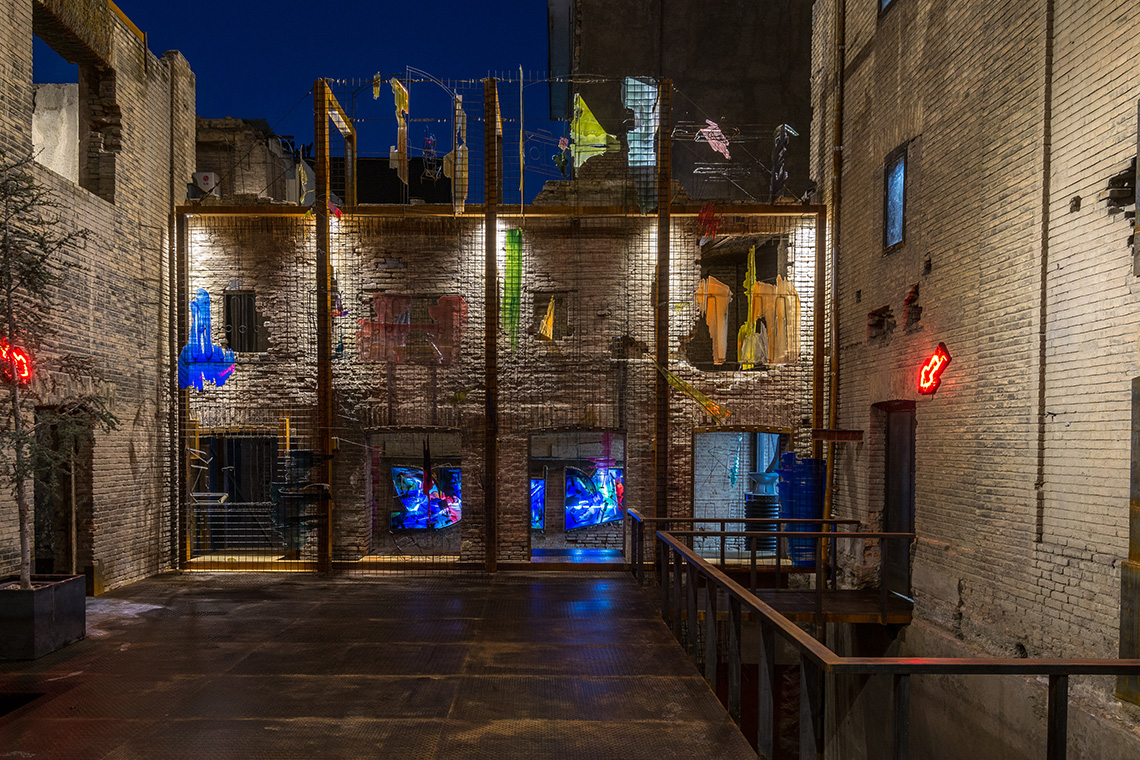 Although these are endlessly difficult times in Iran, both economically and politically, the Iranian capital still shows vibrant signs of cultural life. In an old downtown breweryturned- art foundation is the fantastic post-industrial site for Argo Factory’s latest show – a palimpsest of the past and pointer for the future.

With street protests brutally extinguished in 2019 and an Iranian antiaircraft missile bringing down a Ukrainian passenger plane shortly after the turn of the year, killing 176 people, not many Iranians are feeling positive at the moment. “The general feeling of hopelessness has also affected the art community,” Tehran-based artist NazgolAnsarinia admits. “It is hard to know what the right thing is to do at this moment.

Should one continue to work as before, or should one stop?”
Ansarinia has not stopped. She recently (on 10 January) opened her first major survey exhibition at the newly renovated Argo Factory – the first private museum on such a scale in Iran. It was, however, a tumultuous path to the opening, which was rescheduled twice. “We’re lucky that, amid all the economic volatility, we did not have to sacrifice much of the architectural vision,” comments HamidrezaPejman, founder and director of the Pejman Foundation, a private art organisation in Iran.

The renovation was planned and executed by the New York-based architecture studio asa north, known for its creative practice and collaborations with artists and writers. The result is a carefully restored building that combines the old and new in stunning ways.

Argo had already hosted major shows when still in partial ruins. In early 2017, a year after the Pejman Foundation had purchased the 100-year-old factory, the first exhibition was of works by NeïlBeloufa. 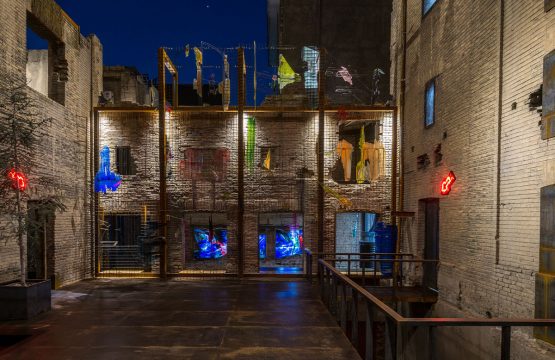 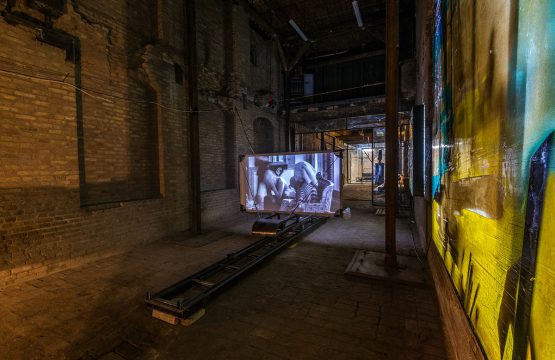 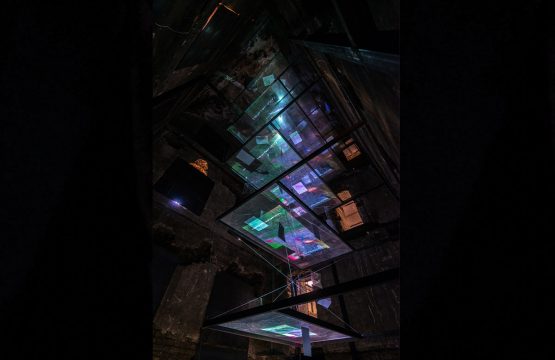 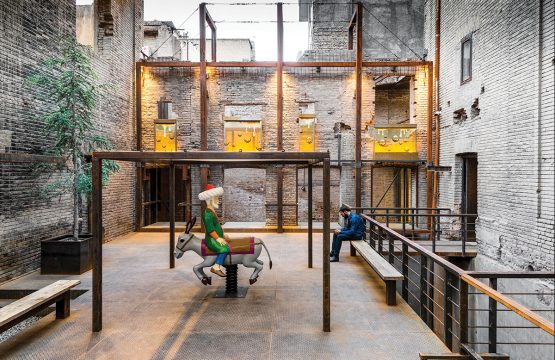 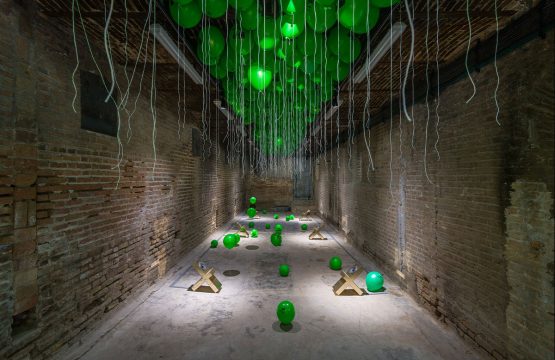 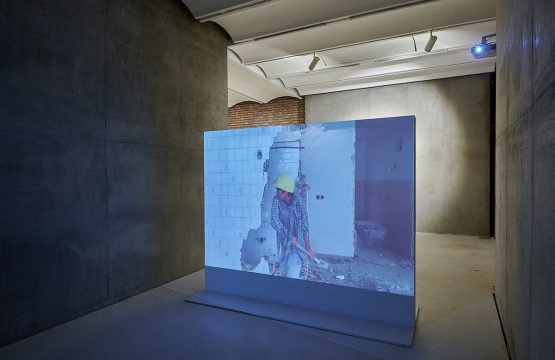 Interacting with the vast unfinished space was particularly significant to the French-Algerian artist, whose work is fundamentally concerned with the relationship between representation and power. Site-specific art alternated with elaborate restagings of older projects and films. These included The Analyst, the researcher, the screenwriter, the cgi tech and the lawyer from 2011. Showing what seemed to be surveillance footage shot from above – and which was wildly interpreted by the five commentators – this work was projected on a new display comprising multiple plexiglass screens that spanned several floors. CCTV cameras were also installed throughout the factory, with the footage presented as part of the exhibition – further undermining conceptions of authority.

Employing non-professional Iranian actors, Beloufa, who shot a new film in reality TV style during his stay in Iran, also projected a trailer under the title Restored Communication – and the film has only recently been completed. “I’m interested in society and how society represents itself and reality TV is a sign of the times”, Beloufa explained in an interview with Film Comment in 2019. “When a country starts to open itself up, that’s when reality TV arrives . So, it felt accurate. Iran didn’t have reality TV.”

While the cultural environment in Iran has its own conceptual and experimental tendencies, questions about the role of contemporary art and how it should be defined are subject to ongoing debates to which Beloufa’s show certainly contributed. “This is our standard,” explains Pejman, who is on a mission to bring more contemporary art to the country. “We need a standard. You need to place your target somewhere.” To underscore this, he invited yet another star from the global art world to Tehran. For the collective Slavs and Tatars, the Iranian capital was one stop in their mid-career survey which toured several cities in what they call ‘their region’, roughly comprising Eurasia.

he exhibition Nose to Nose evoked the image of synchronised breathing and gestured to what lies at the heart of their practice: the meeting, merging, and translation of ideas and identities on an intellectual, spiritual and corporeal level. The restaged work Not Moscow, Not Mecca adapts syncretism as a means to narrate the region through the tasty and seductive perspective of fruits. It is Slavs and Tatars’ hallmark to pack complex research and theory into pointed visual representations, such as the children’s spring rocker, Molla Nasreddin the Antimodern (2012). “The antimodern in the courtyard really served to highlight the accessibility and availability of the space to Tehran’s very popular downtown neighbourhood,” emphasises Payam Sharifi of Slavs and Tatars. “We had wanted to a do a show in Iran for quite some time, but were awaiting the arrival of an institution with a real public-facing remit. That is, not a commercial gallery or a space in the chicer districts uptown,” he continues.

It seems that the new museum has been warmly welcomed by the local municipality. As Pejman recalls, “Prior to the foundation’s acquisition of the Argo Factory, the building was put to auction four times. It received specific calls for its demolition, which luckily faced swift opposition from the municipal organisation overseeing properties that are significant to local cultural heritage.” This is remarkable in a city like Tehran, where cultural heritage typically gives way to investors’ interests. It is particularly curious that this rare call to preserve an old building was directed at a former brewery, in a country where alcohol consumption is illegal. NazgolAnsarinia’s first comprehensive exhibition in Iran aptly signalled the re-opening of Argo after two years of reconstruction. The Room Becomes a Street, on view until 10 April, has been curated by Aram Moshayedi from the Hammer Museum in Los Angeles.

Ansarinia’s project Demolishing buildings, buying waste (2018) raises the question of whether the city is being built or being destroyed, as the artist has mentioned herself. Ansarinia’s work can be understoodterms of archaeological excavations and urban investigations thatuncover layers of social change and economic trends that mould the city. “After focusing so much on the demolition happening in the city, I myself ended up renovating a 70-year-old house in Tehran,” she adds. “I came to see how the house is as much a psychological notion as it is a physical object.” Her latest work, The Inverted Pool (2019), a lifesize installation in the factory’s courtyard, represents this intersection between the mental and physical environments.

The critical ramifications of Ansarinia’s work offer an interesting perspective on what the vast development effort surrounding the revamped Argo Factory might mean for the old district of Ferdowsi.
Whether it will add value to the popular quarter without fuelling further gentrification is yet to be seen. Equally, its long-term impact on the local art scene is also unclear, but will undoubtedly depend on its ability to exercise influence without abusing its privileged status. A private institution of this size cannot avoid a certain proximity to the authorities and so the main challenge is to maintain its credibility, locally as well as internationally, despite these pressures.