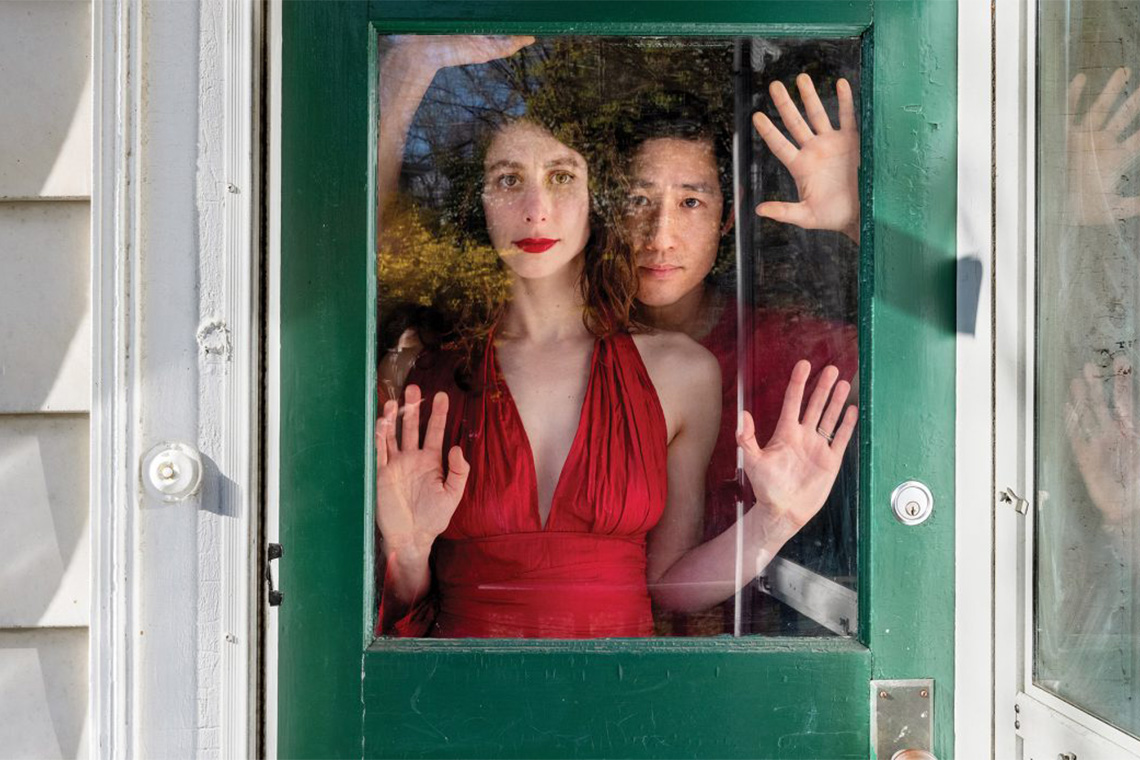 When all seems fragmented and lost, the exhibition Art in Isolation: Creativity in the Time of COVID-19, currently on show at the Middle East Institute in Washington DC (ends 29 January 2021), has brought together voices from all over the world in a simultaneously light and dark cameo of lockdown life. Words by George Pendle

Cities of hermits. Countries of recluses. Anti-social societies. The pandemic has made the paradoxical possible. Traditional signs of greeting – kisses on the cheek, handshakes– have been weaponised against us. Maskshave become signifiers of care rather than concealment. Time itself has been wrenched off its diurnal rhythm as weekends blend into weekdays, national holidays scarcely register, everyday becomes Whateverday. At times, peering out onto empty streets, it has felt like the end of the world happened but someone forgot to turn out the lights.

This discombobulating disaster is presented in all its weird glory in Art In Isolation. In direct defiance to the strictures imposed by the pandemic, the show is the result of an open call, welcoming in over 200 entries from the Middle East and its diaspora. Fifty-four artworks were eventually chosen from both emerging and established artists and are displayed in the MEI’s gallery and on its website, with the works themselves being sold off to help support the artists taking part.

The pandemic has, if nothing else, been an experience that everyone in the world has shared. For all the deaths it has caused, it has also created a strange solidarity between people who might never have had anything else in common. And so, despite the disparate provenance of the artworks, a visitor to the MEI can find a string of shared tropes and sensibilities stretching between them. Here is a universal tale of restriction that everyone can understand.

Take Reem Al Jeally’s Room 306 (2020), in which a seated figure has become cocooned in her chair, a brown smudge dissolving in a puce room while a sickly beam of sunlight spills through the barred window like a toxic cloud. The result is both grotesque and yet strangely recognisable. We have all, at one point or another during the past twelve months, been similarly immobilised by dread, uncertainty or ennui. It’s one of a series of works Al Jeally created in her native Khartoum during the lockdown. “I tried to capture the emotions given by the same day passing over and overwith no change in sight,” she says. This is everyday life becoming a slow imprisonment.

Then look at Asim Ahmed’s Untitled 01 from the Homesick series (2020), a photograph of two women staring out of the windows of a grubby, damaged building, the broken and bent window frames seeming like the bars on a jail cell. It’s a pensive, quiet scene, a cold light picking out one of the women’s faces but revealing little other than an undefined tension. It is when one learns that the photograph was taken in Ahmed’s war-torn home of Aden in Yemen that the twist in the work’s title becomes apparent. This is not a sickness caused by being away from one’s home, but frombeing kept within it. Like Al Jeally’s Room 306, the very concept of home itself has become infected, diseased. For the women in Untitled 01 the pandemic is just the continuation of a battle for survival that was already taking place.

There are riffs on the tedium of life under lockdown. Sina Ata’s hypnotic abstract grid #796 (2020) seems to chime with Mahmoud Alhaj’s photograph Fragile II (2020), in which popped blister packs of pills transform into tower blocks through whose empty pouches people peer. Both artists’ use of repetitive grid-like structures suggests not only the unending– and in Faraj’s case, medicated – monotonyof lockdown, but also the carved woodenlatticework of the mashrabiya, a poignant symbol of home in Islamic architecture. Meanwhile, the photographs of Rania Matar show her friends trapped behind windows and doors like insects beneath a microscope slide. Throughout the show the viewer is continually left peering in at people peering out. Windows and doorways constantly seem to frame the artists’ subjects, creating pictures within pictures from which no-one can escape.

This isn’t to suggest that it’s all doom and gloom. IlyesMessadoui’s satirical painting HELP (2020) is a riot of bright paint, embroidery thread and sardonic humour. Half-naked figures chase outsize coronaviruses across thecanvas while a banner across the top reads

“No mask needed, I have a private jet”. It’s a tale of modern taboos and suggests that the pandemic has just led to a deepening of inequality, hypocrisy and double standards. Similarly, in Pandemic V2 (2020) the Istanbul-based artist Erhan Us has photographed a roll of duct tape on a toilet paper roll, creating a mordant one-liner that critiques art world mores – in particular Maurizio Cattelan’s infamous duct-taped banana, Comedian (2019)– through the lens of the toilet paper shortagethat marked the beginning of the pandemic.

It’s not unusual for artists to be inspired by moments of extreme constraint. Whetherit’s war, prison, hospitalisation or political duress, chains can often inspire as much as they hamper. Indeed, there is something about the art created for this show that is reminiscent of non-state-approved artists in the Soviet Union during the 1980s. These artists, who refused to work in the figurative socialist realist style, turned their own apartments into works of art for lack of outlets anywhere else. Here too at the MEI, there is a similar, palpable need by artists to transform their immediate surroundings into art, as if by looking long enough at their living rooms and kitchen tables they might be able to engineer an escape through them.

Quarantina (2020). Made in his New York apartment during lockdown, it’s a short film of paper dolls going about their daily glamorous lives, to the narration of Turkish singer and gay icon Zeki Muren. Here, within the confines of a small New York apartment, fabulousness is achieved. A bathroom becomes a spa, a kitchen table an exotic restaurant. The world in all its splendour is extrapolated from home. Amidst the strictures of the past months, Tuncay’s vision is supremely life-affirming. Just because our horizons shrink, he seems to say, doesn’t mean that our dreams should too.