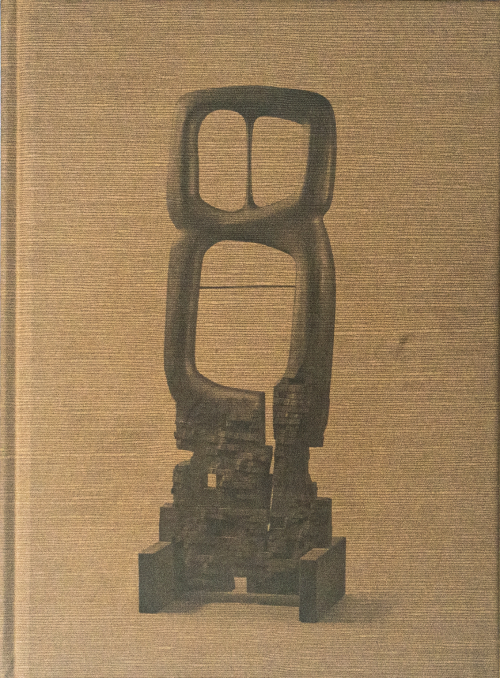 Corpus is an unusual take on the works of Lebanese sculptor Chaouki Choukini by art critic Kevin Jones. Coupled with evocative poems by Salah St.ti., the insightful prose tugs at the threads of Choukini’s invisibility in the art world – a disappearance at odds with his relentless output for the past 50-odd years. Part-short story part lyrical essay, with a parallel nonlinear sequence of images and sketches grouped thematically rather than chronologically, it steers away from strict biography. The meandering form expands on the idea of corpus, signifying both a body of work and a body – corps. Despite the consistency in Choukini’s medium, his works have evolved from early figuration at the largely traditional .cole nationale sup.rieure des beaux-arts to a complicated perspective of hybrid structures that marry horizontal, vertical and lateral front-to-back planes. In this expanded dimensionality of mass versus crevice, the artist’s body is always implicit.

Monumental but on a human scale, the artist’s signature mechanical-lookingb contraptions are marked more by a static suspension than movement. Jones presents these works as greater than the sum of their parts, matching the artist’s whole-body techniques with equally muscular descriptions. While many are totemic or in precarious balance, others become stratified plateaus, defunct musical instruments or the oblique objects of a cabinet of curiosities. Corpus is a decidedly powerful gesture in rendering visibility to what a largely unknown, idiosyncratic sculptor sees. As Jones states, “The sculptor constantly disrupts our notion of foreground and background, almost antagonizing our sensitivity to fathom what is in front us, and what he wants to bleed in from the distance.”