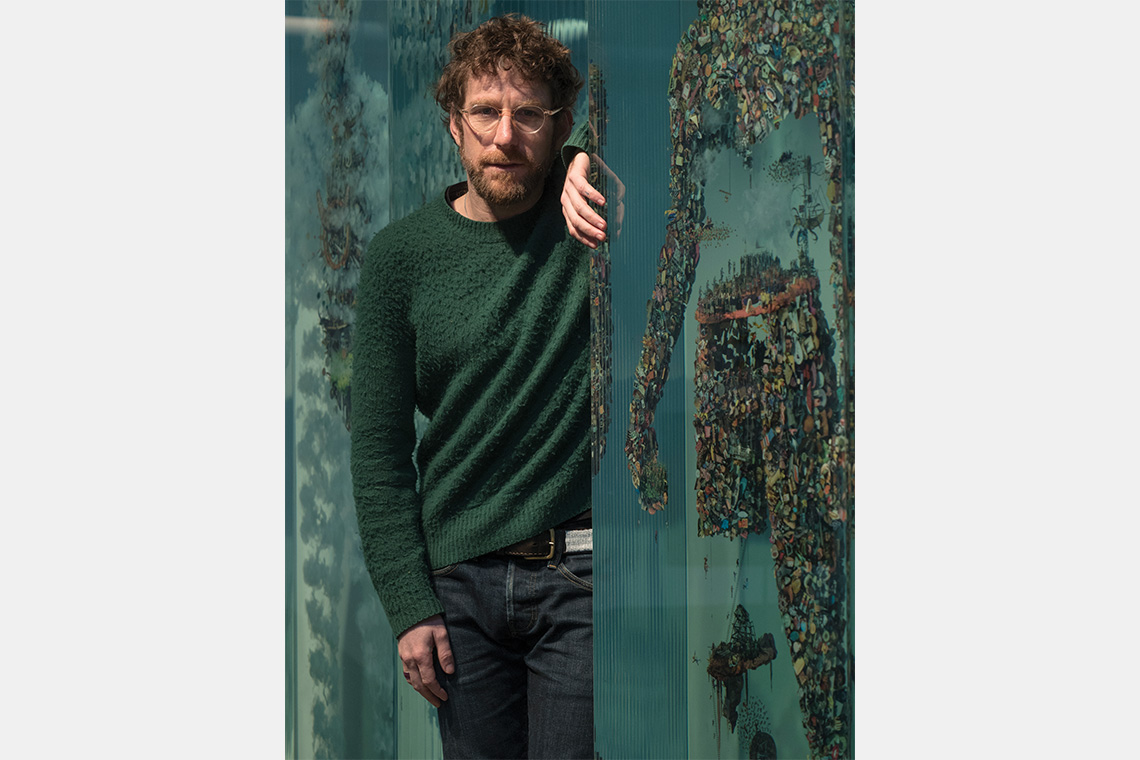 The art world first took note of Dustin Yellin when Psychogeographies, his series of life-sized, illusory 3D humanoids that appeared to float in translucent glass boxes, was shown at the Lincoln Center as part of New York City Ballet’s Art Series in 2014. The maverick chats with Nadine Khalil about his art, Pioneer Works and more, when she caught up him at Abu Dhabi Art.

Dustin Yellin has the air of a mad scientist about him. “Twenty years ago, I wanted to be like Buckminster Fuller or Nikola Tesla – I was really torn between science and art,” he says of the time he was having crazy dreams, creating art and studying with a physicist. “I had dropped out of high school and hitchhiked across New Zealand, Australia and Thailand. When I went back to Colorado – I was born in LA, but my mother took me to the Rocky Mountains when I was five – I met this physicist who taught me about consciousness, the environment and energy production. Then I moved to New York and was taught by all these people who were going to art school – I didn’t. I was the weird outsider making art.”

I meet Yellin in front of the Leila Heller Gallery booth at the art fair in Abu Dhabi, where he was pacing about with restless energy. “There are tonnes and tonnes of ideas in my head; it’s like catching butterflies – you have to be a traffic cop,” he adds. “I need to meditate… Can’t you tell?” And then as a passerby asked Yellin if he knew the name of the artist who had made the installations at the booth, he replied cheekily with a grin, “Yes, his name is Dustin.”

I ask him what is happening with the Psychogeographiesseries, for which he is making 120 mixed-media anthropomorphic sculptures in total, seemingly trapped in massive ice blocks and inspired by China’s first emperor, Qin Shi Huang, and his funerary art – the famous Terracotta Army. “I’m so sick of it but it will take another year or two for me to complete,” he says – it’s already been five and running. “It represents a taxonomy of invented specimens, which I scaled to life-size.” More than that, it serves as a kind of colossal archive of a collective consciousness. In 2012, Yellin first started experimenting with this level of detail when he made his Hieronymus Bosch-inspired Triptych, a 1,000-kilo terrarium replete with a blood-spewing fountain, animal-headed creatures, a bird god tied to a battleship and a gigantic cyclopean female serpent. It sold for $1.7 million at Sotheby’s. 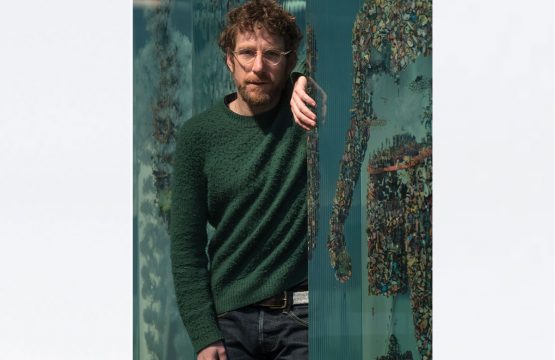 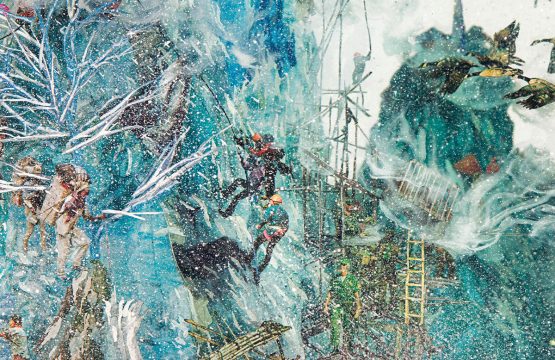 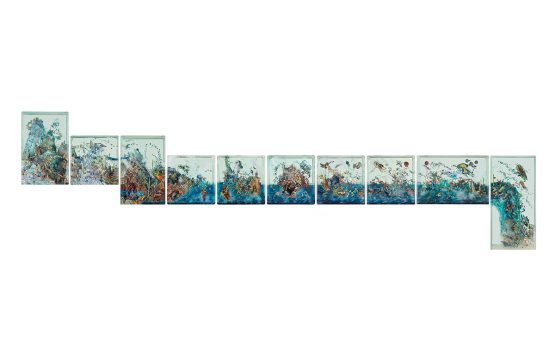 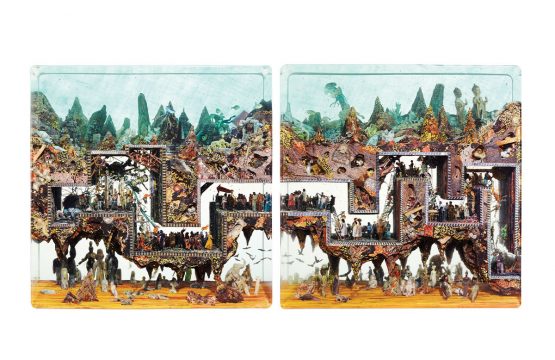 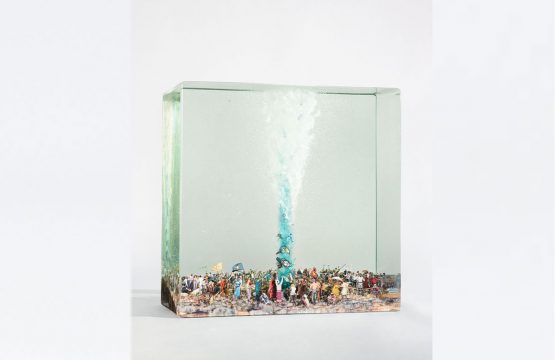 Yellin’s work has a quality that is both cinematic and static – the life that abounds in his freeze frames reads like a phantasmagoria. “I think of myself as a movie director making still movies,” he reveals. His elaborate glass sculptures are fantastical tableaux that depict frozen apocalyptic scenes, bearing a pristine transparency and a complex density all at once. Teeming with people and creatures in vast landscapes of overpowering natural and manmade disasters, they are like waking dreams. “When I’m awake it’s like a hallucinatory dream and when I’m asleep it’s like everything is going wrong – a girl is mad at me or the building is on fire. Everything will go wrong in my sleep.”

We turn to a block reminiscent of a 3D version of Fritz Lang’s film Metropolis. Aligned with Lang’s bleak vision of a city as a well-oiled machine on the surface but with an intricate system of toilinglabourers beneath, Yellin’s map of tunnels looks like a cross-section of an underground city, where a riot of people marches through its different elevations, sometimes in Roman garb, other times as torchbearers. It is called a Study for a Tunnel to the Centre of the World and every time you look at it, you’ll notice another facet.

“Right now my studio has tunnels like this but they take up a whole wall, and are in seven sections. The work represents the past and the future existing simultaneously,” he continues. “On one side, there’s a spaceship and the tunnels are very geometric, as if made by machine. On the other side is the past, and the tunnels are softer, intestinal and curving, made by hand. There, a totemic antenna to the gods is being built. When you stand back from the work, the past and present collide in two parallel worlds; two oceans that fall into a third…”

“So this is a sketch for the tunnels on my wall… I always start with a sketch – and these smaller, individual works are like storyboards for moments in my larger compositions,” he explains. “My most recent work, Ten Parts, is of the whole world melting and drowning as the oceans fall off the edge of the world.” Illustrating devastating tides, the massive five-and-a-half-tonneTen Parts carries a nightmarish vision of ecological doom in a dramatic history that charts ontological motifs with magnitude expressed through the minute – thousands of small cutouts, often of people, animals, objects subject to the forces of nature – sandwiched between layers of glass. These are the building blocks of Yellin’s work and are derived from a painstaking art process that involves a complex, almost compulsive compilation of found images, which he then categorizes and moulds into painted collages on sheets of glass that are glued together. “It’s very obsessive, I have a whole library that’s being cut up constantly and sorted by a team. It’s like an internet of paper… there are drawers of clippings of icebergs, animals, machines and buildings.”

“I think that in a hundred years, paper will be gone. It’s almost like an antiquated version of AR or VR,” he muses. His work with images appropriated from books, encyclopedias and magazines as raw materials, stems from his early days making art drawn from public spaces – he calls himself an ‘urban didact.’ “I pulled shit off the street, like the paint on doors, mattresses and garbage – I loved trash and found things.” It isn’t surprising to learn that Joseph Cornell, the master of assemblage and an avant-garde filmmaker, was a huge influence on him.

The turning point in Yellin’s career was in 2002, when he moved away from painting. “I was literally making Agnes Martin-like grids on canvas and pouring resin over them… I then saw there was an optical quality to this, so I built wooden boxes to make 3D collages out of objects [which included insects]. I started drawing around the objects the way you would draw around a dead body. Then I realised that I could draw in space. I didn’t want to die from the resin so I switched to glass – it was an accidental medium. But using glass meant I could go backwards – if I wanted to put a Greek statue here or a piece of oceanic art there, I could build a narrative and edit; I could change my mind. So it altered my practice dramatically.”

From Yellin’s painting-sculptures, one can discern worlds within worlds; a universe’s contained chaos that maps out the millions of ruptures and breaks in the grand narrative; a utopia in dystopic conditions. He’s applied a similar methodology for Pioneer Works, the mammoth nonprofit cultural space he founded in Brooklyn in 2010. Using a laboratory-like model, the organisation aims to bridge the institutional gap between art and science through creative collaborations and residencies that cut across the disciplines. Yellin tells me that it all comes from Beuys’ notion of social sculpture. “I kind of agree with Beuys that everyone is an artist and that civilisation is a sculpture in its own right. In this vein, as much as Pioneer Works is a separate culture centre that’s distinct from my art practice, it’s also a social practice. And it takes up so much of my time, more time than anything right now. It’s a crazy project to try and change the paradigm of cultural production and education, whether these are museums or universities. I’m looking at where we can build new models that bring people together from different disciplines, like music, science, art, technology and literature.”

It is all part of what Yellin considers one big experiment. “I feel like I’ve done nothing yet. All I do is try and fail,” he continues. And I don’t know whether he is pulling my leg, but it’s impossible not to salute him for his courage.