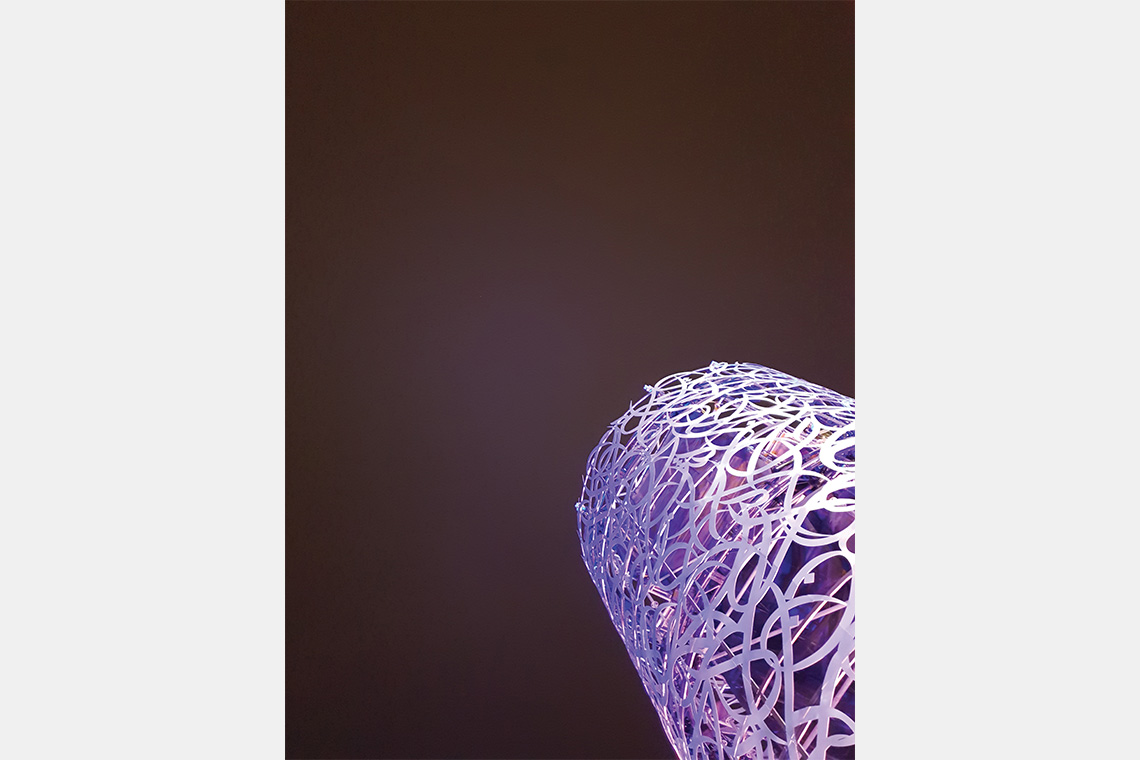 A year-long residency at Tashkeel’s Guest Artist Programme brought the Tunisian-French artist eL Seed to Dubai in 2013, and he’s been here ever since. From his newly adopted home base, eL Seed takes his work to the streets, mosques, tunnels and slums of the world with his unique and dynamic form of calligraffiti in a utopian vision of spreading tolerance through art.

On 29 September last year, in Toronto’s Yonge-Dundas Square, eL Seed unveiled a towering aluminium sculpture of calligraphic lettering, as part of the city’s annual Nuit Blanche celebration of contemporary art. It spells out an Arabic translation of Prairie Greyhounds (1903), a two-part poem by Mohawk poet, writer and performance artist E. Pauline Johnson (Tekahionwake). The poem describes a journey to a promised land and in conceiving the piece, eL Seed recalled the biblical myth of the Tower of Babel; a mighty tower which was destroyed by humankind’s linguistic divisions. For his reflective artwork entitled Mirrors of Babel, eL Seed proposed an inversion of this legend by suggesting that art and language can bring people together.

With this, as with every project in the artist’s ten-year career, literary references are embedded in what is often a layered context directly relevant to the place in which they are located. On the façade of the L’Institut du Monde Arabe in Paris he hasinted the words of the 19th-century French writer, Stendhal, who said: “love is the miracle of civilizations”, while in the slums of Cape Town his quote is by Nelson Mandela: “It always seems impossible, until it’s done.”

The artist’s moniker is inspired by Le Cid, the 1637 play by Pierre Corneille based on a medieval Spanish nobleman, Rodrigo Diaz de Vivar, who was known as El Cid by the Moors and El Campeador by the Christians. A celebrated military figure, he presided over – and was supported by – both Muslims and Christians during an 11th-century Castilian epoch that is still held up as an exemplar of a successful pluralistic society.

Although generally referred to as a street or graffiti artist, eL Seed is marginalised by these categories. While it is true that he works in the public arena, choosing communities and cities as sites for his installations rather than more traditional art spaces (and he doesn’t always seek permission), his ultimate aim is humanistic and his belief in the gravitas of art, idealistic. “I believe that art is a way to start a conversation,” he says. “It has purpose and power, and more often than not, when I go to a place to paint or to install a sculpture it is about connecting with the people there and having a truly human experience.”

The sprawling mural that he painted in 2016 over 50 buildings in the segregated Cairo neighbourhood of Manshiyat Naser, famously known as “Garbage City” and where many Cairenes earn a living by sorting through and recycling trash, is a case in point. Despite the fact that they are helping clean up the city and other people’s detritus, they are largely seen as ‘garbage people’ living in garbage, rather than from it. eL Seed’s mural was inspired by the words of a 3rd-century Coptic bishop (“Anyone who wants to see the sunlight clearly needs to wipe his eyes first”) and attempted to dramatically redefine public misconceptions of the community. Added to that, the entire work could only be seen from the vantage point of a nearby mountaintop, alluding to the importance of perspective when it comes to understanding the whole picture. 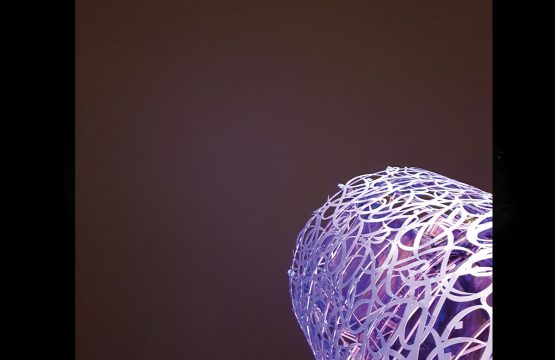 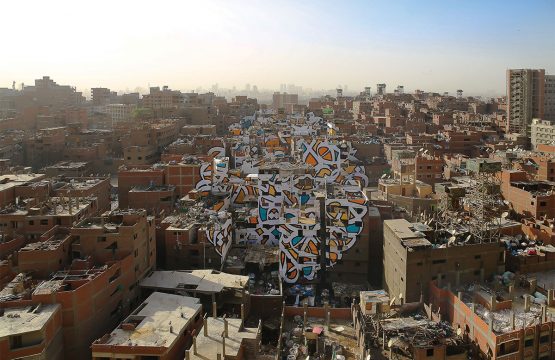 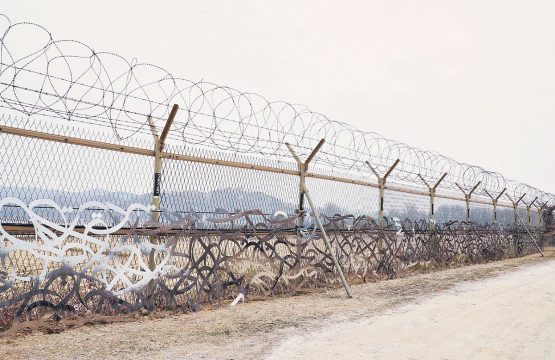 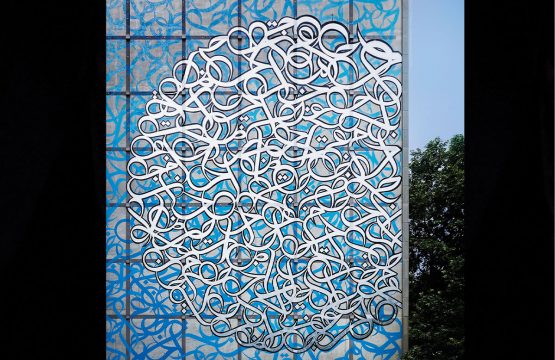 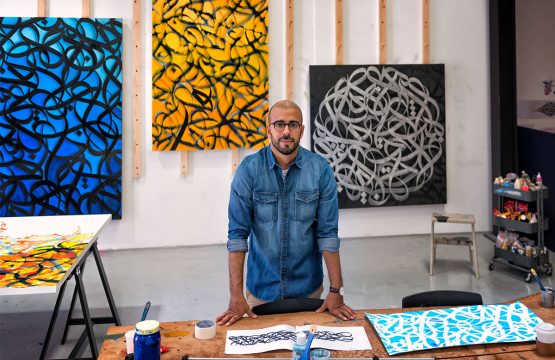 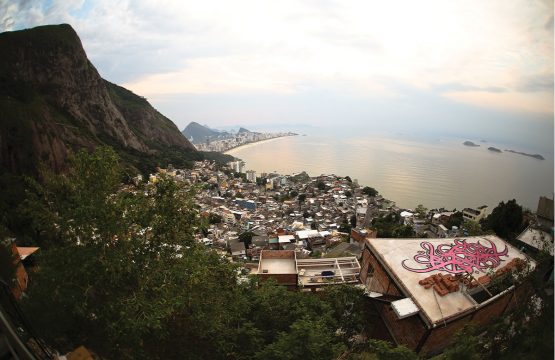 Although eL Seed has been based in Dubai since 2013, he is always on the go. “Moving to Dubai has been a really important part of my life. I have had a lot of opportunities here, not least working with Sheikha Lateefa [bint Maktoum], who has helped me push my artistic boundaries and begin experimenting with sculpture,” he says. “However, at this stage in my life, I feel like wherever I am at any one point is my home. I visit so many places and learn so much from people. Every time I leave an artwork behind, I realise that it is the learning you experience which is the most important part.” Earlier this year, eL Seed sent me voice notes from the Demilitarized Zone (DMZ) between North and South Korea where he was installing The Bridge. Comprising 43 aluminiumlaser-cut panels attached to the metal fence along the border, the piece spells out the words of Kim Sowol, a Korean poet who died before his country became divided. Believing that the artwork could act as a call for unity, eL Seed was overjoyed when, just six months later, the leaders of the two nations met in Singapore to begin peace talks (even though it means his work will not be finished or needs to be taken down). “I’m not saying that my artwork had anything to do with that, but I know that art can cut through the boundaries that we place between ourselves, whether these are physical, cultural or linguistic.”

Interestingly though, since eL Seed’s art is almost always composed of Arabic calligraphy, he creates his own boundary in the form of a language barrier for those who do not understand his work, all the while espousing inclusion and universalism. This apparent paradox might be related to his own relationship to the Arabic language. Born and raised in Paris to Tunisian parents, he spoke the Tunisian dialect of Arabic at home, but he could neither read nor write the classical language. In his early years, in order to fit into French society, he shunned his Arabic roots altogether. He rediscovered Arabic at 18, when he started to reconcile both parts of his identity. “It was difficult to realise that I was totally disconnected from a culture that I belong to,” he says. “I felt ignorant of the language and wider culture, and I felt the need to get back to it.” Ironically, this helped him accept being French as well. Immersed at the time in the Parisian street art scene, he devised his own freehand calligraffiti style, which he paints in perfect circular symmetry.

“Arabic calligraphy has this universal beauty and it is not about reading, it’s about feeling.” Similar to the way the sound of music resonates in a foreign language, eL Seed maintains that the Arabic language is accessible to all through its intrinsic aesthetics, which explains why he doesn’t see his art as an alienating linguistic tool. “The rounded shape of the Arabic letters is more natural and pleasing to the human eye than the Roman letters, which is why I believe they can touch the soul.”

The notion of legibility is another important consideration. Whilst he has never signed his work, rejecting the idea of ownership, eL Seed’s style is highly recognisable and yet mysterious. For an artist who relies on script as his medium, his elongated, looped lettering is almost impossible to read, even for a native Arab. “The first calligraphers used to say they wanted to put mystery into their work. They wanted people to focus and spend time with the text, which was usually Quranic. I am inspired by this idea and I definitely want my viewers to experience a sense of discovery. That is why my artwork remains calligraphic and not typographic; there is a kind of romanticism in the practice, which I love. I want to keep it indecipherable, to abstract it in a way, so that if someone likes it, they will try to get into it. Making my art difficult to understand is more of an invitation to learn.”

By not looking for his art to be deciphered or translated, eL Seed appeals to the senses in his work, to the human in us. Somehow replicating the insider-outsider relationship he has to his own heritage, he is saying that within urban culture, the movement of his words and the poetry he sources are more powerful for their breadth than their actual meaning.