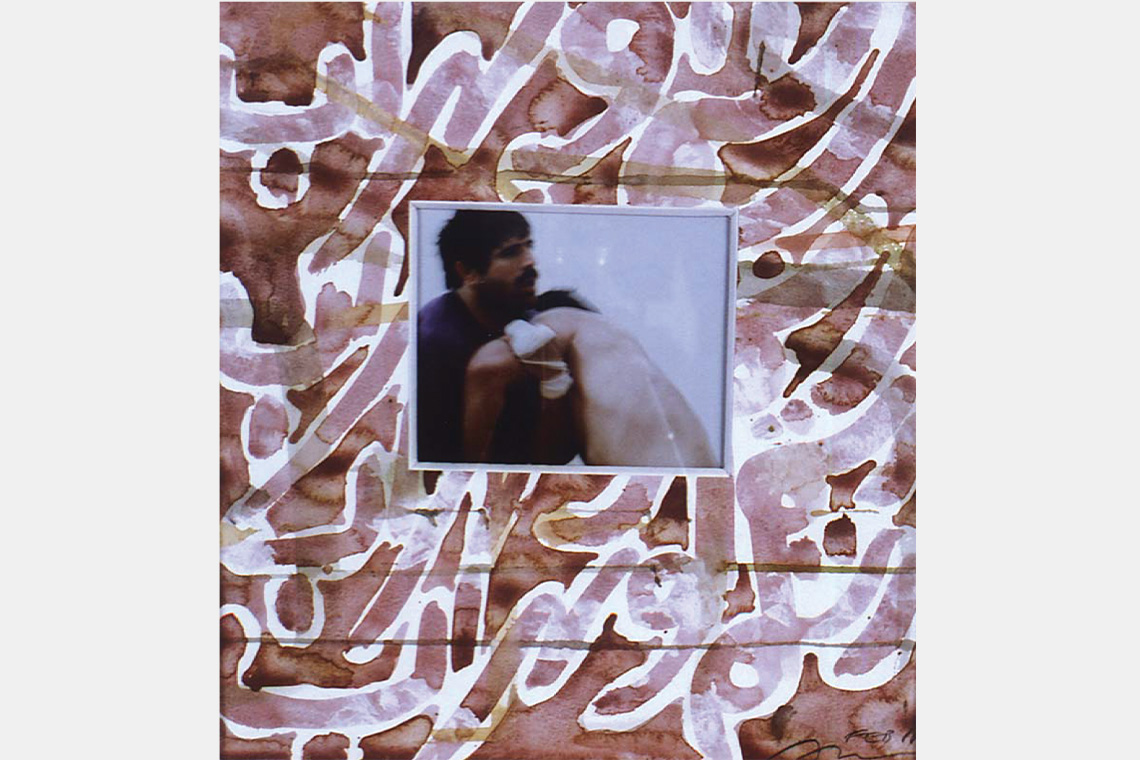 A looming father figure of the Iranian art scene, and at once collector, mentor and artist, Fereydoun Ave is known for spearheading Tehran’s first alternative art space in the 1980s, his artistic obsession with masculine tropes embodied in the 10th-century mythical hero, Rostam, and a close relationship with Cy Twombly. His own work, though distinctly Iranian in its preoccupations, marries all these influences in a rich lyrical abstraction, as he reveals to Tahereh Sariban during a home visit.

Several days before my meeting with Fereydoun Ave, I had caught up with a prominent Tehrani gallerist who knows the artist well. “A machine,” were the two words he used to describe him. To clarify, he then added: “His energy… he’s unstoppable. Always the first in to mount a show and always the last to leave.” It made me wonder how the interview might go and whether it might prove hard to keep up with an artist so much on the go.

Yet, when we meet in his Bois de Boulogne apartment, Ave could not be more welcoming. He has prepared two bowls of lemon sorbet  sprinkled with lemon rind and herbs. We debate where to sit, and end up settling down in the dining room. “The chairs might be pretty but they’re uncomfortable,” he apologises. We are however in good company, surrounded by a black-and-white Farhad Moshiri of deconstructed, intertwined Farsi letters and numerals and a Cy Twombly drawing resembling an inscription – works that spur our discussion on the place of the written word in Ave’s artistic practice.

Cy Twombly (1928–2011) is always the invisible figure in the room, a tribute to the impact the great post-WWII American painter had on Ave’s artistic career. Ave and Twombly met in the south of France in the late 1970s, and Ave makes no secret as to the power his friend subsequently exerted over him, both as an artist and as an individual. “Cy would say, ‘I start with a line. Sometimes, it becomes something more,’” he recalls. As our conversation veers toward Persian calligraphy, he remarks, “You know – and this is something I once told Cy – in Persian, the word for ‘line’ and ‘calligraphy’ are one and the same – khat.”

His intonation betrays the realisation then of something intensely freeing; the idea that the artist could trust the simple line to blossom into meaning – whether as a word, a drawing, a thought, a memory – and that nothing more was required than this consciousness of humble beginnings to express and produce something greater than the sum of its parts. 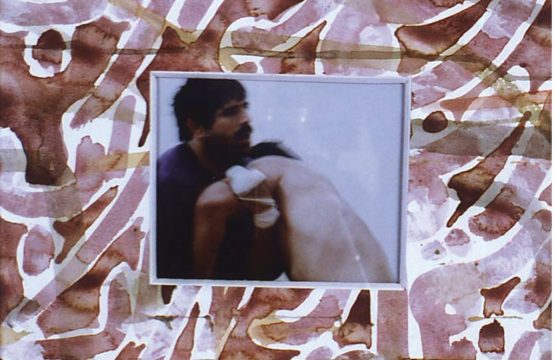 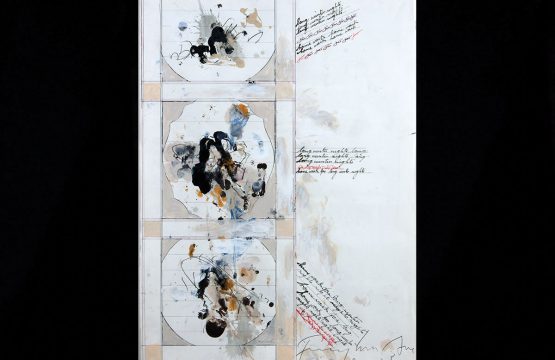 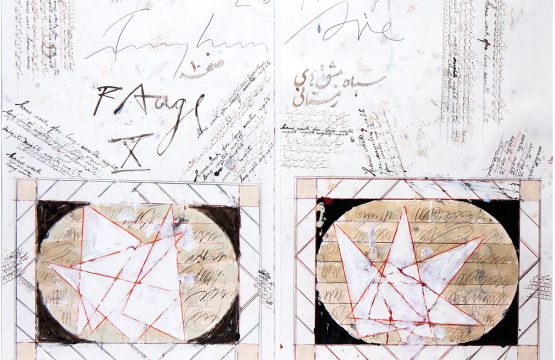 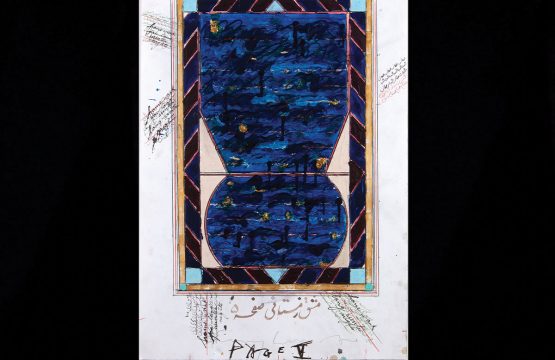 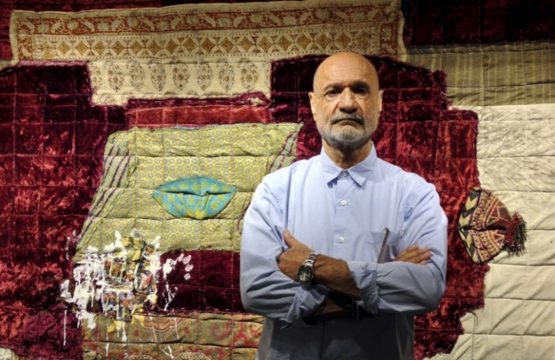 Through these exchanges, Twombly also enabled Ave to develop his artistic practice by melding the drawn line with unequivocal visual references to Persian motifs, emerging from the myths of manhood and bravery and the poetry of flowers, rivers and skies. These two elements, tradition and a mark on paper – one as unknown and vast as the other is contained and conspicuous – sit at the foundation of Ave’s work, and are the cipher through which Ave the artist unfolds.

From his Roman Notes series (1970) to the legendary Bacchus series (2003-8), the latter arguably representing the culmination of his painterly practice, Twombly morphed his flowing gestural writing into graffiti, in elemental and epic form, as supporting text to the bigger picture happening on the canvas. Ave on the other hand oscillates with his use of words, on occasion incorporating entire sentences into mixed media collage while at other times drawing inspiration from traditional calligraphy to reinvent a genre of his own, such as in his latest series. Ave flips the pages of a Sotheby’s auction catalogue and draws my attention to a collection of Ottoman edicts, scrolls and prayers – meticulously drafted in gold letters and adorned with decorative illuminations and annotations.

Homework For Long Winter Nights is a series of works produced in 2018 during a cold Parisian winter, inspired by the Ottoman art of book-making and illuminated manuscripts. The overall look and feel of seventeenth-century Ottoman Turkish manuscript pages is preserved; in fact, Ave’s works evoke the originals so powerfully as to trigger the promise of understanding. Yet a closer look reveals the absence of written text, with words replaced by geometric drawings,shapes and splashes of colour like ink blots. The “story” has gone missing. Or is it being told? Some works bear a page number, as if torn from a book. What was the greater narrative? And who does it belong to? “That’s the thing with language,” Ave remarks. “It seeks to explain everything and cement meanings.” In this latest series, as in all of his oeuvre, Ave leaves much to the viewer’s discretion. His art is his code, sparking the stories we would like to conjure.

Every piece contains a single textual reference, placed as an annotation – the full series title is written in Persian and English. In Persian, it is a romanticised extrapolation from the Farsi SiyahMashq, which literally means ‘black text or drills’. These drills are the wrist exercises done by calligraphy students to practice their technique and refine their art. As so often, the way to Ave lies through Twombly: “Cy once recalled an exercise he went through at Black Mountain College, where he was instructed to draw in calligraphy in the dark and using his left hand.” In this way, Homework For Long Winter Nights reads as part elegy, part recognition of two artists trained – sometimes harshly – to work inside frames, and to generations of artists seeking to break out by creating stories outside the borders of a page.

Over five decades, Fereydoun Ave has polished a distinct personal mark through an oeuvre, largely mixed media in composition, that explores identity through insightful cultural and social references hewn from his Iranian heritage. “I can’t wait for my next show [at Total Arts with artists Shaghayegh Arabi and Ali Razavipour],” he confesses. At 73, his excitement remains reassuringly fresh and palpable. Like an crisp mark on the paper poised for its unknown journey.