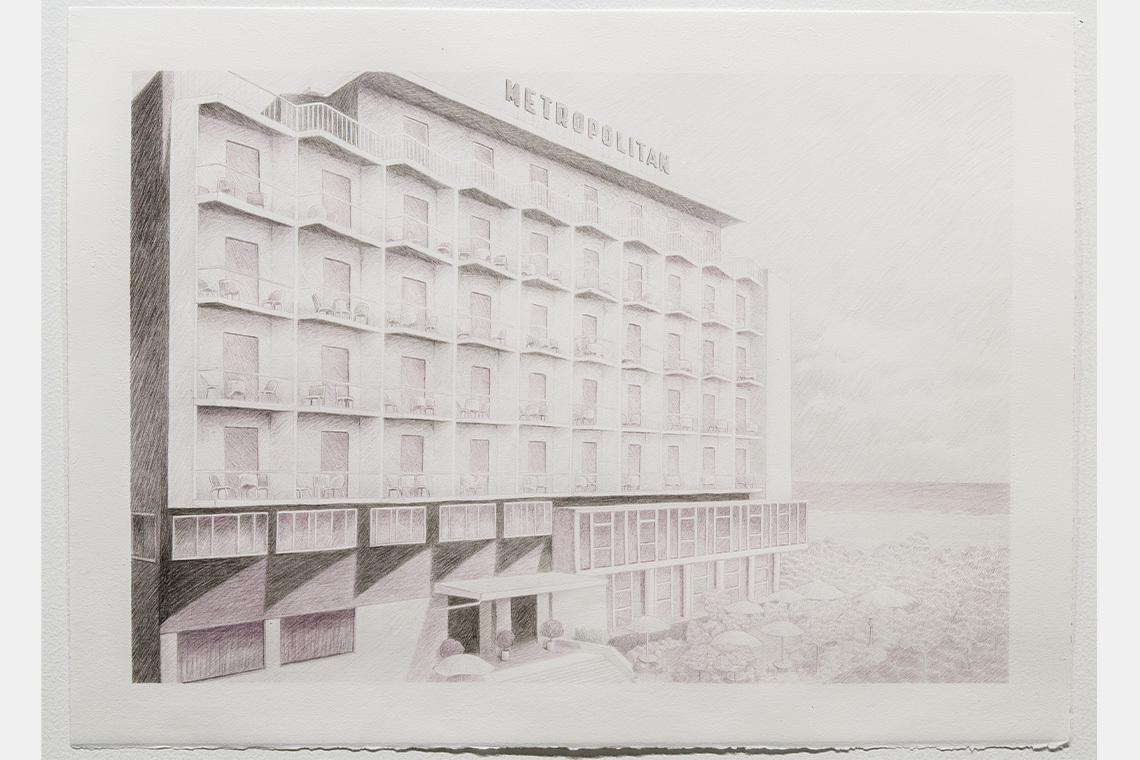 Born in China and raised betweenBahrain and the UAE, Dubai-based conceptual artist Lantian (Lee) Xie describes his practice as “making images about cosmopolitanism and belonging.” From the perspective of an insider who is also an outsider in one of the most multicultural cities in the world today, Lee makes “allegories for statelessness.” Conceptually-adept and equipped with the sharp eyes of a stranger in a strange land, Lee offers an insightful new look into contemporary Dubai, a place where time has collapsed in  a manner that collides and elides Gulf Futurism with a nostalgia for an imaged cosmopolitanism of the 1950s and 60s.

In order to understand Lee’s practice and the context from which  it emerges, we need to understand that he identifies as and is also  recognised as a UAE artist. Returning soon after receiving his MFA from the Art Institute in Chicago and a degree from the Interactive TelecommsProgramme at New York University, he was recognised as an emerging talent in the UAE by the Sheikha Manal Young Artist Award in 2012. He is exhibited as a Dubai-based artist internationally and regionally in spaces including Edge of Arabia, the Brunei Gallery SOAS and the Delfina Foundation in London, and the Sharjah-based Maraya Art Center and Barjeel Art Foundation. Especially when seen in the context of Dubai’s emerging art scene, at spaces such as Grey Noise, Traffic and Green Art Gallery, Lee’s particiation in Dubai’s local contemporary art discourse and its concerns with identity and society in the context of a space marked by shifting spatial and temporal aspects becomes visible.

This June at the 47th Art Basel, Lee’s work received an important  new level of recognition and was presented by Grey Noise gallery in the Statements sector, where new solo projects by emerging artists at up-and-coming galleries are presented at the important art fair. Statements artists are further considered for the prestigious Bâloise Art Prize which has been awarded every year since 1999. The Bâloise group, a banking and insurance company with a strong commitment to promoting emerging contemporary artists, not only acquires artworks by the award-winning artists but also donates them to important European art institutions, making it an influential award that can change an artist’s career by bringing his or her work to a wide world stage. 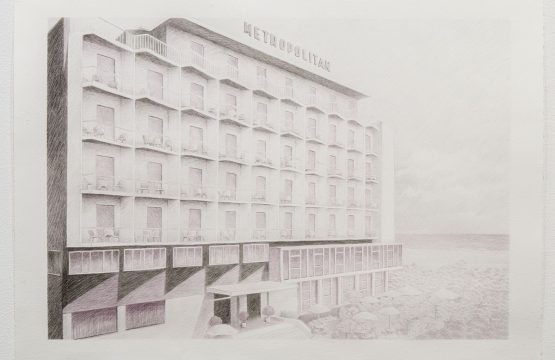 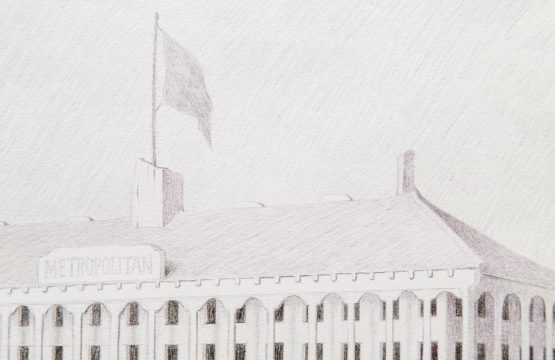 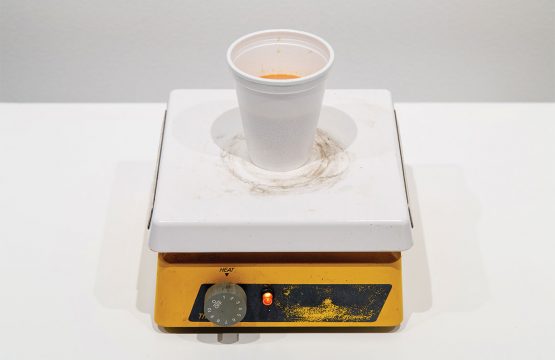 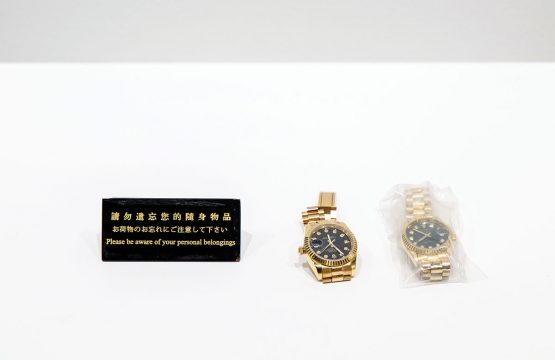 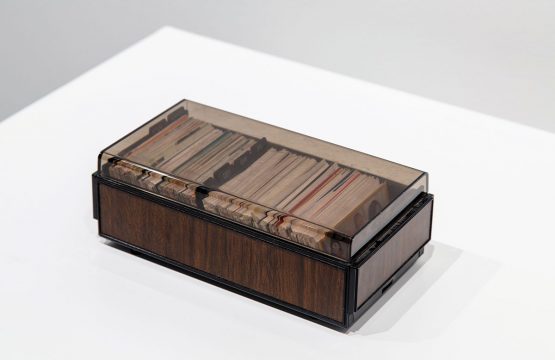 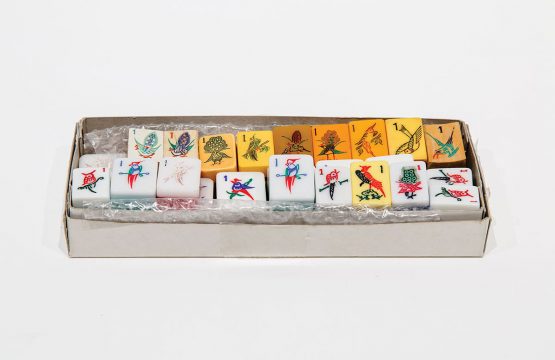 I was invited amongst a few art writers and curators for a special preview of 2020-2046, Lee’s conceptual project for Art Basel, before it was crated and shipped to Switzerland. In the back office of Grey Noise, a series of images covered a wall and an initially-confusing series of objects, several of which also emitting sounds, were laid out on surfaces around those images. Titled after two key future dates, Lee’s work refers to Dubai’supcoming Dubai World Expo in 2020 and the title of Wong Kar Wai’s 2004 science fiction film imagining Hong Kong in 2048. The viewer immediately has sense of how this seemingly disjunctive series of objects captures the particular temporality and cultural identity that marks his work.

At the centre of the exhibition, we find 15 colour drawings of period images of Metropolitan hotels, or “non-spaces” as Lee calls them, meticulously drawn in grey and sepia pencil tones from artefacts such as postcards, etchings and advertisements. From his perspective inside the Gulf, and Dubai in particular, which is strongly identified with the tourism industry, he points to the role of “aspirations of materiality” and the “myth-making” inherent to hotels as interstitial spaces. He continues by explaining how he has considered the geopolitical dimensions and the history of the regional hotel industry referring to Egyptian President Gamal Abdel Nasser’s deal with Conrad Hilton for the first internationalhotel to open in the post-war Middle East in 1959. Known as the “Jewel on the Nile,” the Cairo Hilton was built on the site of the British barracks and seen as an emblem of Egypt’s optimistic future after a traumatic history stretching from the 1952 revolution, the overthrow of King Farouk, the nationalisation of the Suez Canal and all the way to the 1956 invasion by Britain and France.

Lee describes his work as an intervention where the artist essentially “inserts a hand into how an image travels through history” by creating a wall of composed of drawings of various Metropolitan hotels from around the word including Madrid, Hong Kong and Dubai. Arranged as a group, the specific locales fade into the background and the wall speaks to these iconic Metropolitan hotels’ historical association of with a certain idea of “Americanness” that was synonymous with modernity during much of the second half of the 20th century. The series tell a tale of the fractured nostalgia for a faded or even failed idea of the future and globalisation.

The remaining pieces in the work contribute to that sense of disjunctive time though their presence as everyday objects, clips of video and sound. In Yan Can Cook, Lee references an American cooking show that was popular on UAE television in the 90s which he recalls as one of the first times he saw someone who looked like him on local television, adding another layer of dissonance to the complications of identity in a place such as Dubai. The viewer imagines the disturbance that the artist must have experienced upon seeing this loud and very American TV personality ofChinese origin, which is further communicated by the juxtaposition of the syncopated sound of Yang’s knife-work playing on a vintage vinyl record player as a carousel slide projector showing images of his hands at work. These already complex elements are accompanied by four sculptural pieces, a pastiche of momentos of the world the artist uses to imagine the future-oriented yet nostalgic gaze of 2020-2046. A box of mahjong tiles, two gold Rolexes accompanied by the small plastic sign found on tables in Chinese restaurants and a half-full cup of chai resting on a hot plate, a collection of Massage centre calling cards in a business card holder and a recording of the answering machine from a fast-food delivery call center. The discrete items reinforce the overall story about some unspecified event or place that bears traces of the people whose hands might have touched them and awaits their return. On a flat screen on the other side of the room, a flatscreen television plays a looped clip from the 1976 dystopic American film Future World. On the screen, we see droves of tourists from all over the world in absurdly stereotypical ethnic costumes representing various countries all arriving at a luxury resort. The scene, with all the visual markers of colourised film in the 1970s and the lack of political sensitivity to ethnic differences, reminds viewers of a strange amalgam of other disturbingly utopian visions of a multicultural world that are often associated with that same moment of American post-war optimism from the It’s a Small World ride at Disneyland to Shenzhen’s Window of the World and still visible in Dubai’s