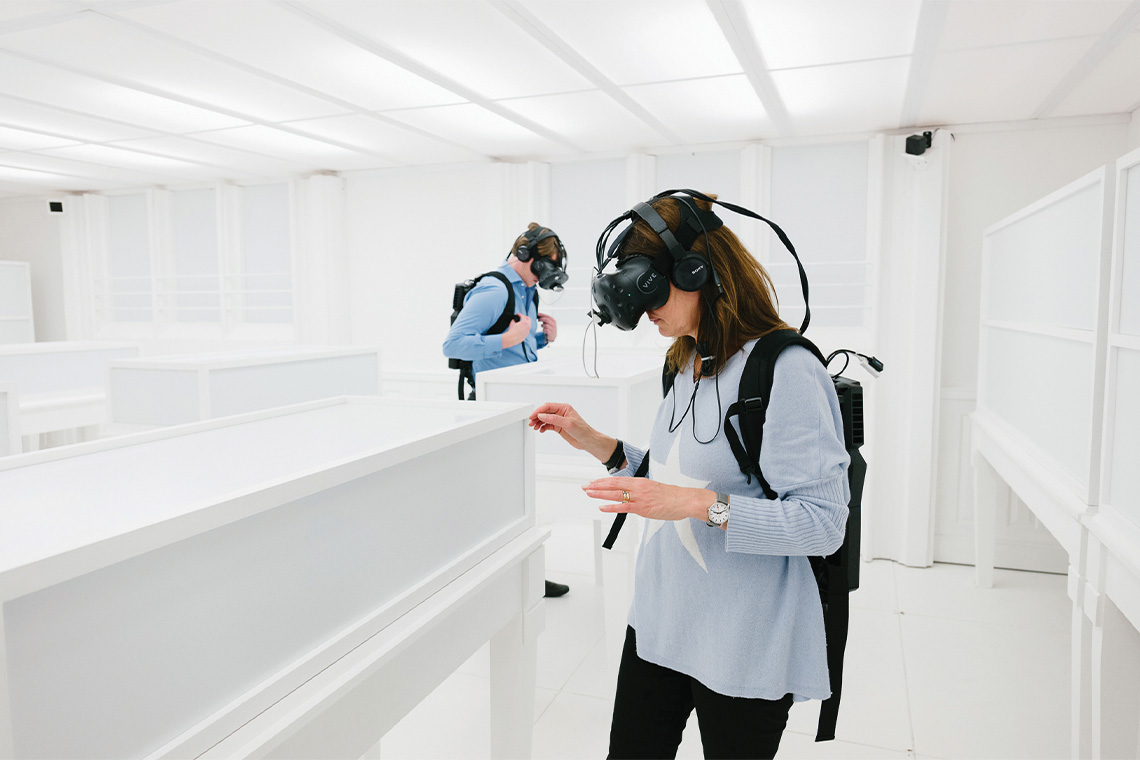 BACK TO THE FUTURE

In an exclusive interview, James Parry meets Mat Collishaw and learns how and why he is using state-of-the-art technology and the illusionary techniques of the Victorians to create dramatic and thought-provoking imagery.

A ring of hummingbirds whirrs repeatedly in and out of flower blooms, extracting nectar. Above them, a circle of extravagantly plumaged birds of paradise flash their iridescent feathers in frenetic courtship displays, while down below, industrious bowerbirds busy themselves selecting items with which to adorn the decorated arenas they create in order to attract a mate. Throughout, on multiple levels, the petals of pink and blue flowerheads open and close in perfect synchronicity. It’s flashy, exuberant and eye-catching, just as it’s meant to be. This is The Centrifugal Soul (2016), an installation by Mat Collishaw inspired by complex avian display rituals and the process of natural selection.

“I wanted to make something about the way people communicate,” says the artist, who emerged from Goldsmiths College in the late 1980s as part of the group that became known as the YBAs, the Young British Artists. “In this manic digital age people have become obsessed with the visual projection of different aspects of themselves, or even completely new personas via Tinder, Instagram or whatever. These are self-created forms of external display, rather like those performed by birds in their courtship behaviour.”

Set in a velvety dark space – so its flashing colours are even more dazzling – The Centrifugal Soul is a spinning, mesmeric sculpture based on a 19th-century invention, the zoetrope. The Victorians excelled at the technical manipulation of light and imagery to create special effects, and an interest in how they did this, and how humans might be genetically wired to want to project images of themselves, has been the hallmark of Collishaw’s practice for many years. Among his earlier works was Catching Fairies (1996), in which he unpicked and put his own spin on the Victorian fascination with ‘photographing’ the supernatural. “The capturing of a thought, belief or act, whether real or imagined, in a visual form is central to the concept of art,” he says. “New technology is revolutionising how we do this.”

The transience of being, and the ephemeral and changing nature of appearances, are also long-term interests of Collishaw. He wasbrought up in Nottingham, not far from what’s left of Sherwood Forest, the ancient tract of woodland, which was famously where Robin Hood resided. The forest is home to a handful of surviving ancient trees, among them the Major Oak, estimated to be as much as 1,000 years old and kept going by a series of human interventions. Largely reduced to an antique husk of bark masking an eroded and rotten centre, the tree is held up by a series of posts and cables. “I visited the oak several times as a boy,” recalls Collishaw, “and became caught up in the mythology surrounding it. Later, I found myself drawn to the symbolism of its seemingly dead structure – especially that empty core, which reflects the void at the heart of our own existence.” 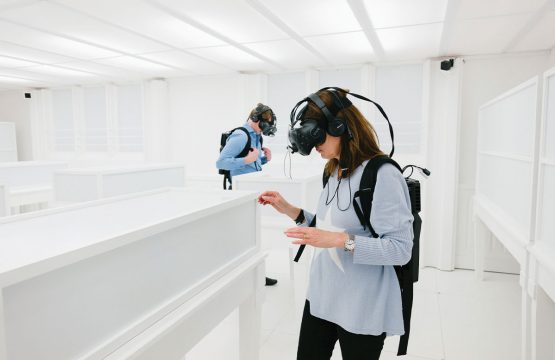 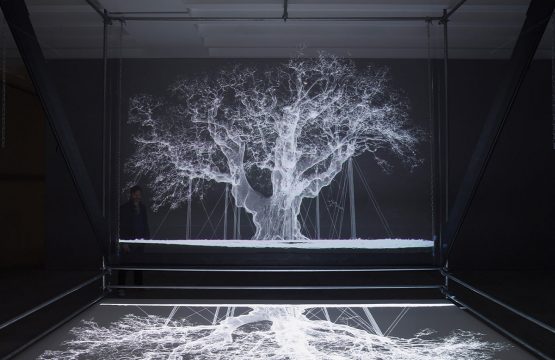 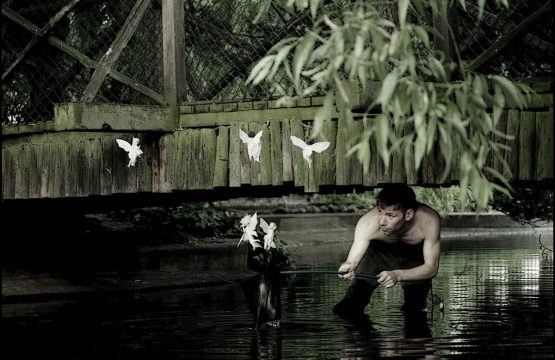 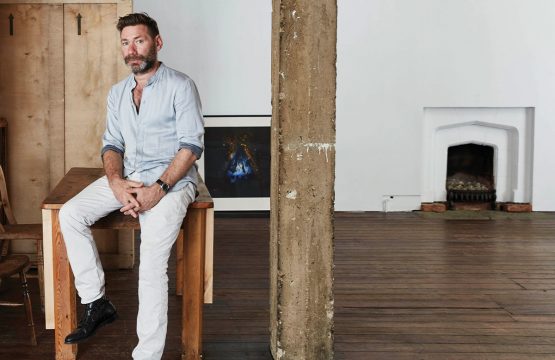 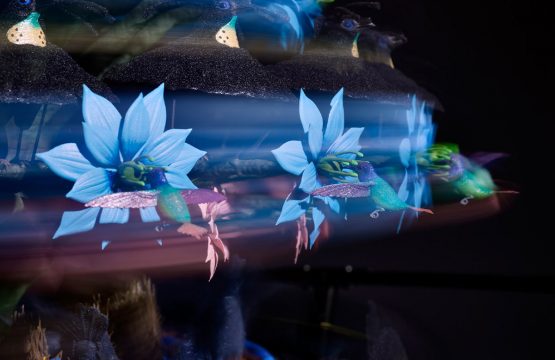 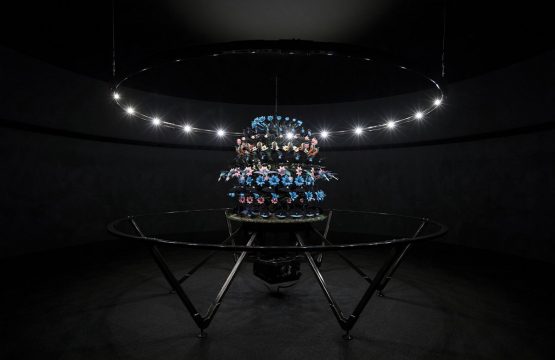 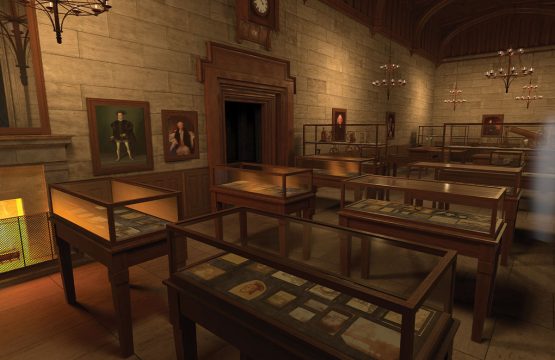 The result was Albion, a huge and ghostly rendering of the Major Oak created by laser scanning and which slowly revolves. Collishaw’s interest in different methods of projection led him to investigate the Pepper’s Ghost illusion, a Victorian device that relied on reflecting angled images off plates of glass to create a transitory “now you see it, now you don’t” effect. With Albion, the tree appears like a vast negative on a glass screen– but walk behind, and you see nothing. Like a vast interrogative X-ray, itexposes each part of the tree to scrutiny and especially the life-support system provided by the scaffolding to which it is connected. “[This work] focuses on how myth can be more powerful than reality,” explains Collishaw. “Rather than letting this tree die naturally, it’s been kept alive with rods and chains, which I see as an act of indignity to something so majestic.”

Collishaw’s interest in 19th-century techniques of image representation led him, somehow inevitably, to William Henry Fox Talbot, the grand master of early photography. From his home in Wiltshire, England, during the late 1830s Fox Talbot invented some of the first known processes to create fixed images on paper. “He was at the leading edge of technological change in his day,” says Collishaw, “able to reproduce infinite numbers of pictures and fuel the growing public appetite for visual imagery. This has huge resonance with today, and the opportunities now made possible by the development of virtual reality.”

The world’s first-ever photography exhibition was staged by Fox Talbot in 1839 in Birmingham, in the room of a building that was demolished a century or so later. Collishaw’s audacious plan has been to recreate that very exhibition, in its vanished space – but in virtual reality (VR). Although also concerned with replicating the actual images Fox Talbot had exhibited – “these were mostly of botanical specimens, stained glass or etchings, few of which we would recognise today as photographic images” – Collishaw’s main motivation was to replicate in detail the features of the space in which Fox Talbot had held his show.

“The creative challenge was to find a way of documenting something accurately that had disappeared,” he says. “VR is going to have as big an impact on art as photography, and it’s still in its infancy, experimental and evolving. That’s what I find exciting about it.”

By working from architectural plans of the lost space and photos taken twenty years before its demolition, it proved possible to regenerate the room. Collishaw worked with Paul Tennent of Nottingham University to design a computer system that not only delivered the required technical result but was also creatively appropriate. “It’s important to me that we view VR as artistic currency,” explains Collishaw, “and that its status as a medium is reflected in the final work.”

The result is Collishaw’s literally mindboggling installation, Thresholds, which was staged at London’s Somerset House in May and June this year, before travelling to Birmingham Museum & Art Gallery during the summer and to Lacock Abbey (Fox Talbot’s former home) during the autumn. Viewers are kitted out with VR headsets and then led into the space by an attendant. Once there, they wander at will, exploring the structure and contents of the room: windows, doorways, vitrines housing Fox Talbot’s exhibited photographs and other features. Through the VR you see a 19th-century interior, while you walk through – and even touch – the tangible form of the space. It’s a spellbinding experience.

“We had to make sure that the physical room matches the virtual room,” Collishaw explains. “Sensors in the installation space track your movements and tell the headset where you are and what you should be seeing through the goggles.” The level of detail he has created is remarkable: moths buzzing around a candle flame, spiders in corners,mice scurrying across the floor. In one part of the room you see a fire roaring in the grate. Move closer, and you can feel the warmth of the flames – except the heat is generated by a convector heater. Meanwhile, other visitors to the space (numbers are controlled) appear as ghostly avatars, so you don’t bump into them.

One of the most memorable features comes when you peer out of the ‘windows’ and see rowdy torch-bearing demonstrators rampaging in the ‘street’ outside. Birmingham in 1839 was the time of the Chartist riots and social unease generally. “Fox Talbot’s show was not so much an exhibition of photography as of cutting-edge science,” explains Collishaw. “And there are direct correlations between then and now, not only in that sense but also socially and politically – the Chartists were fearful of working people losing their livelihood to machines, just as today’s workers are at risk of being superseded by technology.” As Collishaw continues to redefine how technology shapes our art and modes of expression and image-making, we can have little real understanding of what might be possible in even ten years’ time.

During 2018, Thresholds is scheduled to tour to the National Science and Media Museum in Bradford, the YapıKredi Cultural Centre in Istanbul, and the Bodleian Library in Oxford. For further information, see www.matcollishaw.com and www.blainsouthern.com/artists/mat-collishaw