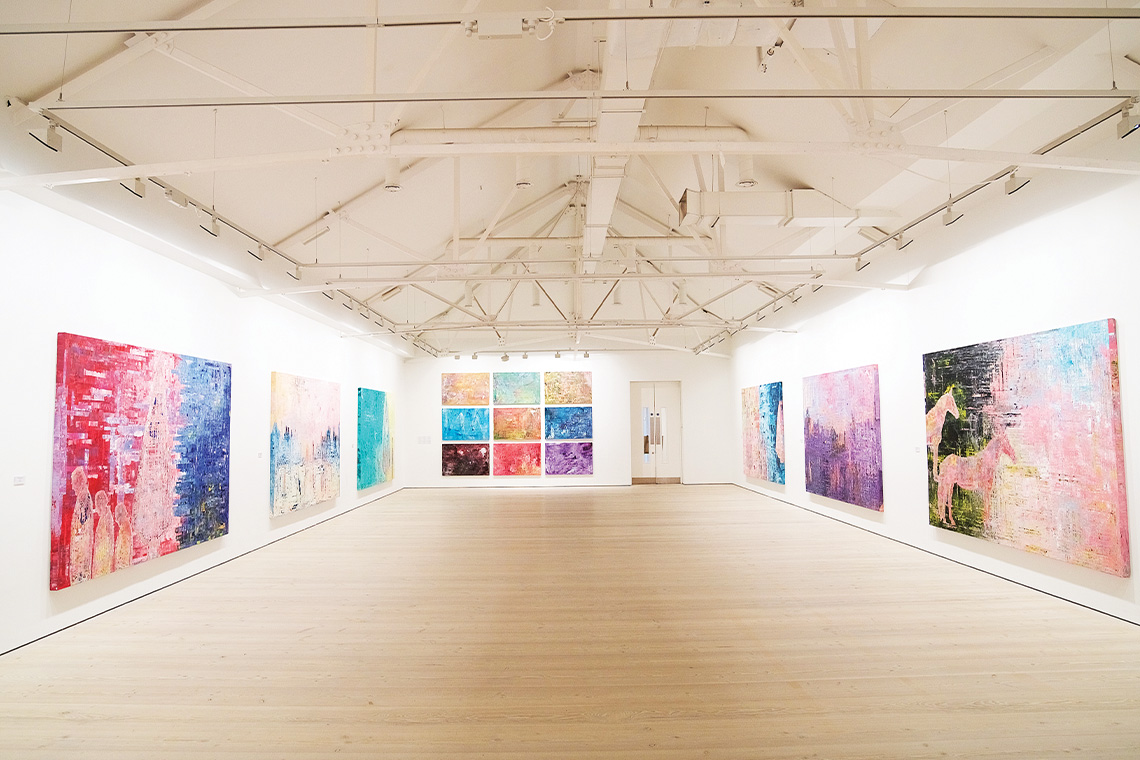 James Parry heads to the south of France to meet Sassan Behnam-Bakhtiar, whose exquisitely crafted collage-based works reflect his Persian heritage and interest in meditation, synergies and why we all might need to get a grip.

Peering closely at the canvas, I begin to comprehend exactly what is in front of me. A complex micro-landscape, composed of swathes of infinitely detailed and minutely orchestrated elements, each of which blends effortlessly into what’s around – and on top of – it. “It’s meant to be viewed from a distance,” suggests the artist, cautiously. He’s right of course, and I step back to take it all in. An arresting large-scale work, rich in colour and texture and redolent with immediately identifiable Persian motifs. It’s just one of several such canvases shortly to leave Sassan Behnam-Bakhtiar’s studio on the Côte d’Azur’s bucolic Cap Ferrat for his London show at the Saatchi Gallery, Oneness Wholeness (15 May–5 June). But a few seconds later and I can’t resist getting up close and personal again, scrutinising every dextrous knife scrape and gesture, visually unpicking all the different layers of paint and emotion as if my life depended on it.

Born in the well-heeled Parisian suburb of Neuilly-sur-Seine in 1984, Behnam-Bakhtiar has become a specialist at creating works defined by such multi-layered imagery, itself inspired and directed by particular aspects of Persian culture and by his own sense of Iranian identity. His parents were emigrés in France, exiles from the revolution in their homeland, and Behnam-Bakhtiar grew up much like any other suburban French boy. Then, at the age of nine, he moved to Tehran with his mother. “I’d never been there before, didn’t speak Farsi and had only a vague notion of what it might be like,” he recalls. It proved a rude awakening. After a year or so at an international school – “it was boring and I was kinda dying there” – the young Sassan asked to be transferred to a local Iranian school. Catapulted into this deeply unfamiliar environment, and one compounded by being the only foreigner at an establishment characterised by institutional antipathy to the West, the unconventional new boy had to shape up or cave in. “I was bullied at first, and singled out by the teachers as well, so it was very difficult,” he confesses. But slowly he manouevred his way into a greater level of acceptance (thanks partly to self-defence classes in taekwondo) and achieved a sort of integration, eventually.

Looking back now, Behnam-Bakhtiar appreciates the authenticity of those Tehran schooldays. “I could easily have stayed at the international school and mixed with other foreigners, but I now really value the experience I had with the boys in the local school,” he admits. “I ended up making many good friends, and my years growing up in Iran [he left again for good at theage of 19] not only helped me understand the country better but also gave me a hands-on insight into local identity and values.” 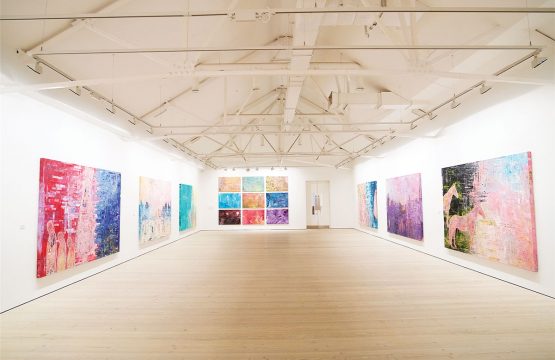 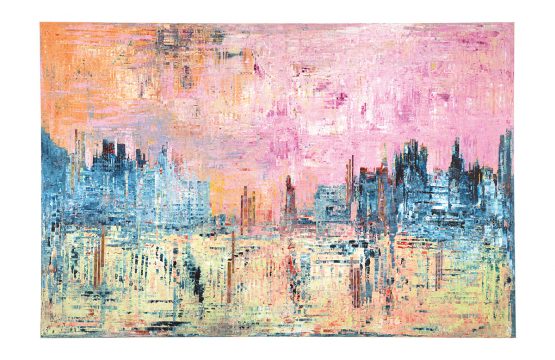 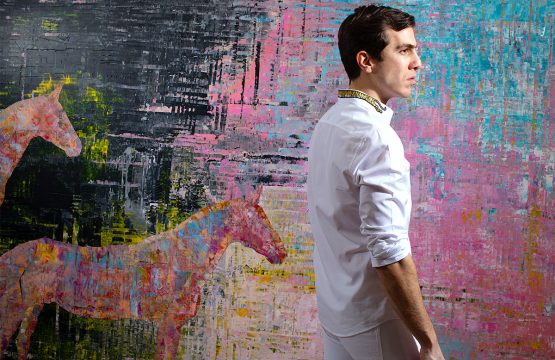 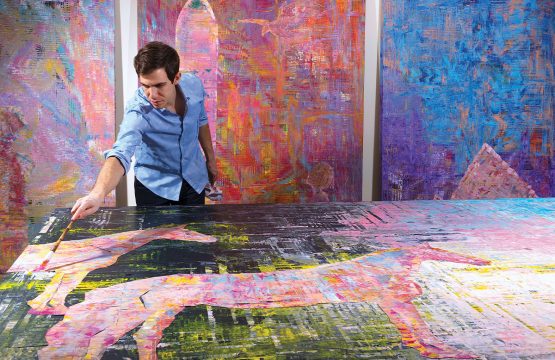 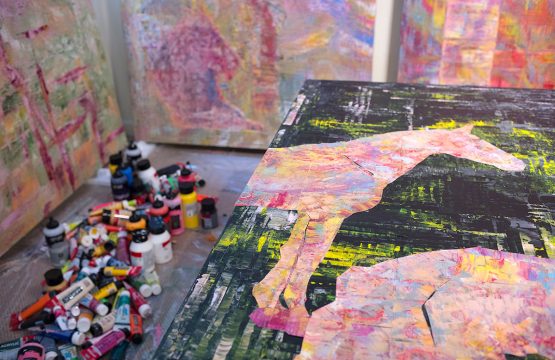 Such a positive take on what was undoubtedly an uncomfortable situation, initially at least, is typical of Behnam-Bakhtiar. Not for him the hand-wringing and tortured rhetoric around identity and dispossession that have come to characterise so much Middle Eastern art. Instead of clichéd artist angst, he exudes a sense of ease with himself, of someone who is highly creative and yet able to channel his energies in wholly positive ways. He meditates regularly, and takes a keen interest in spirituality and ideas around existentialism and well-being, both on the personal and collective levels. Complexity may be central to his motivations and work, but it doesn’t automatically result in conﬂict or dilemma. He is unequivocally clear and focused about his role as an artist. “I will always concentrate on the positive and productive aspects of my Iranian heritage,” he tells me. “Negative perceptions of Iran are everywhere, so my mission is to address these and draw attention to the country’s immense cultural and artistic wealth, something that people outside Iran just don’t hear about.”

Both of Behnam-Bakhtiar’s parents are artists and he started painting as a child, yet has never studied art formally. His studies and career took himinitially into the world of ﬁnance, where he honed entrepreneurial skills that are holding him in excellent stead today as he juggles a portfolio of creative projects that see him variously as artist, collector, patron, curator, and so the list goes on… “As an artist, things really got going in 2009, when I had my ﬁrst proper solo show. I never expected to be a professional artist, but now it’s impossible to imagine not being one,” he admits. After a string of international exhibitions, he is now considered as one of the most dynamic artists of his generation. Attention was focused initially on his neatly retro works incorporating black-and-white photography with vividly patterned cutouts, but he has now moved his practice onto bigger, and arguably better, things.

Behnam-Bakhtiar’s Saatchi show featured 20 of his most recent paintings, expansive mixed-media works on canvas. Rhythmic and vibrant, they are eﬀusive, opulent without being overstated, the Persian symbolism seeping through in the form of quasi-abstract gardens, horses and textile patterns. Human ﬁgures appear like integrated shadows, a nod to the spiritual and physical melding with our environment that Behnam- Bakhtiar espouses. His trademark technique of applying fragments of printed patterns and then overpainting them is what makes these worksso beguiling at close range. None of the collage pieces constitute ‘found’ material – he generates and prints them all himself, based on research and his own designs. He now has a formidable archive. “I had a camera in my hand and started archiving from an early age,” he explains. “It was really important to me to do things my way, I don’t really listen to anyone, to be honest. I work a lot with patterns, so I was always looking for unusual designs. Scans from books, snapshots of things I’ve seen. I love it, it makes me feel good, having this sort of stuﬀ around.”

For a man in the fast lane, Behnam-Bakhtiar is paradoxically keen to advocate a more measured and calm approach to life. “Everything moves so fast in the world today that I feel we have become disconnected from a sense of self, from humanity itself,” he explains. “It’s relentless. I think we all need to pause and take stock, assess what’s missing in our lives and try to rebuild.” On a personal level, he is involved in trying to support the development of the art scene in Iran. “Artists really have a tough time there. So few can actually live from their art. There’s been a huge increase in the number of galleries in Tehran especially, but very few of them do anything to actually support the artists.”  To help improve awareness and create much-needed opportunities for Iranian artists worldwide, in late2016 he founded the Fondation Behnam-Bakhtiar, which now has one of the largest private collections of modern and contemporary Iranian art. It also awards a biennial prize, the Behnam-Bakhtiar Award (won last year by Babak Kazemi). Behnam-Bakhtiar is also planning to open a gallery space in Monte Carlo.

Meanwhile, his own practice continues to evolve. “Sassan’s previous works showed an avant-garde mix of artistic styles and historical references, but this new series oﬀers an elevated understanding of abstract form and self,” says art advisor Nina Moaddel, curator of the Saatchi show. “It captures his inner journey towards a higher state of being and peace, turning his back on the confusion and disorder of modern times.” It’s a bold claim, but Moaddel is right; Behnam-Bakhtiar’s vision is overarching and a signature style is plain and clear, set to forge ahead even further this autumn when he opens a new show of mixed- media sculptures in a tribute to the French master polymath, Jean Cocteau, at the historic Villa Santo Sospir. “Not everything is forever,” says the artist, “and so we must always embrace opportunities and synergies and work with them. Cocteau saw that humanity was on the wrong path, and so do I.”