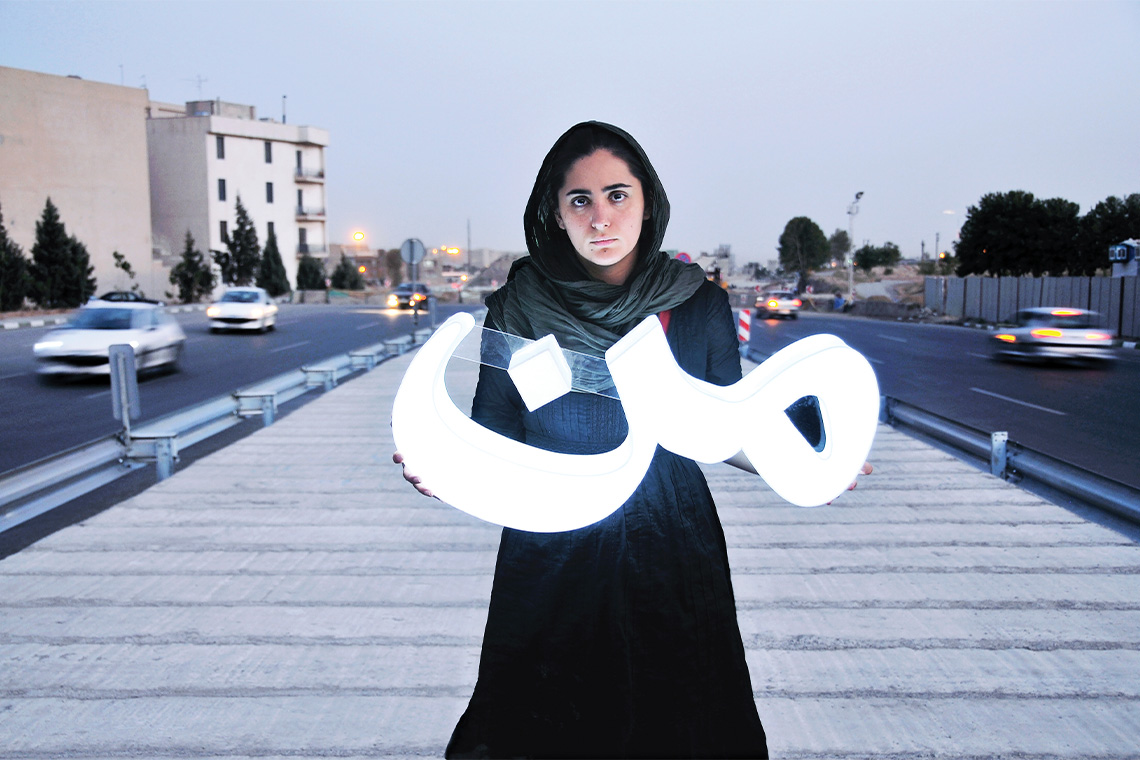 In her emerging art practice, Iran-born Shahrzad Changalvaee’s sculpture-based responses to her environment have been shifting from visual signifiers of typography to the primacy of material. Tahereh Sariban sits with the artist, mapping her trajectory and her relationship to language, as she comes into her own.

ShahrzadChangalvaee was just a toddler when her mother came across two things that may have just shaped her future as an artist. The first was a book relating how an illiterate Iranian king learnt how to read and write with the use of flash cards; the other, a newspaper article arguing that small print was to blame for childhood illiteracy. Convinced that their daughter could learn how to read before the bell of first grade rang, Changalvaee’s parents proceeded to design simple flash cards featuring the words of various animals and everyday objects printed in large, legible font.

With these in hand, Changalvaee learned about the correlation between image, print, sound and meaning significantly earlier than was customary at the time. “‘Bird’ was more about the shape of its word; the curves and Persian letters, rather than its image,” she recalls. In her young mind, words melted into images melted into words and vice versa. Adding an oft-overlooked subtlety, she adds: “I didn’t experience the shock of the alphabet like a lot of kids did at school.”

This interconnectedness between written form, meaning and image triggered in Changalvaee a special rapport with language that has shaped and continues to shape the artistic practice she has developed in adulthood. As a teenager, she wanted to become a graphic designer and enrolled in university to study under the eminent designer Reza Abedini. Under his influence, she developed a refined understanding of what her early experience with words had already intimated: that form and content generate each other. As she puts it, “The appearance of a word, as in typography, can lend meaning and context – since a font is more than just a visual transcription. How a text is written gives context to what is written.” 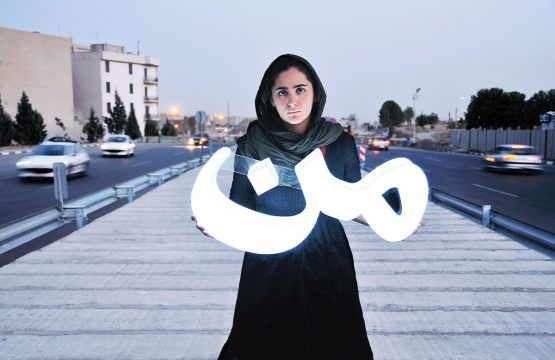 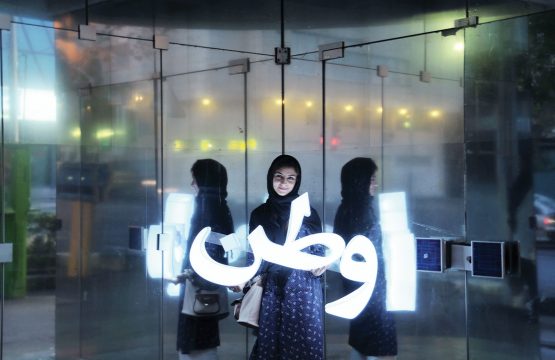 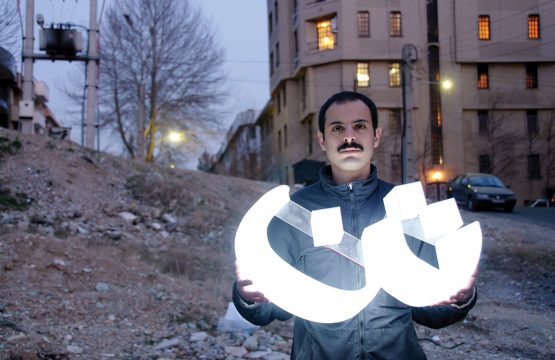 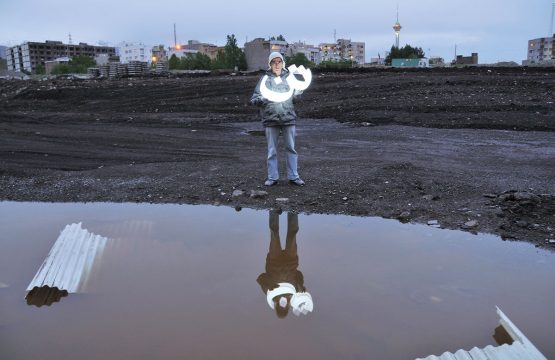 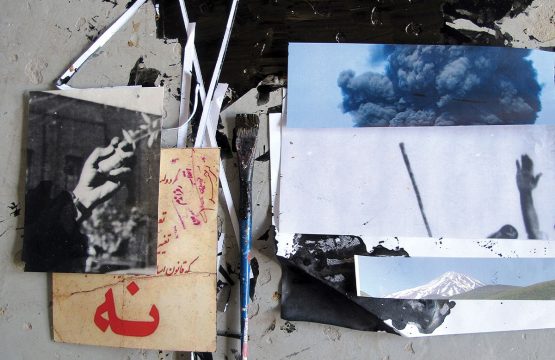 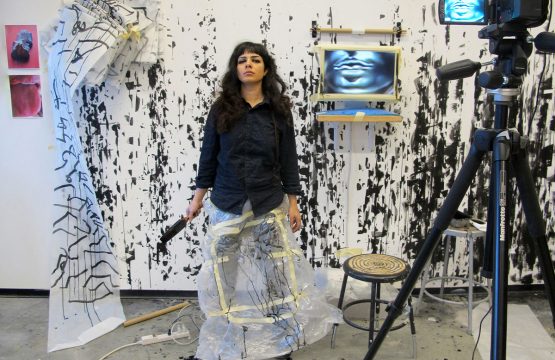 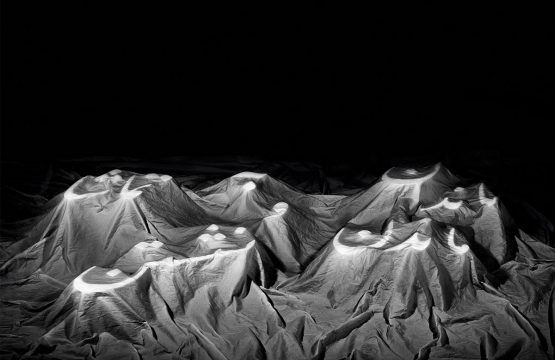 In 2006, after years of working as a graphic designer, something in Changalvaee  changed – she calls it an artistic need to experiment, which was restricted in the world of typography. Her first experiments employed the elements she was familiar with in typography. “I wanted to bring about a type of play that didn’t require my full force. I would set the scene and pick my materials, but would also include an element of surprise.” She made words out of ice and watched their meaning transform as their shapes melted and  dissolved. She created text out of dripping paint and drowned plastic words in liquid. She photographed these performative experiences in the studio and used the camera as a tool to document the sculpture-in-formation.

The artist’s first big public intervention was in 2011 with Man, Tan, Vatan, a photographic series featuring people holding lightboxes of the three Persian words. Anyone who saw it back then would surely harbour a feeling of it today, whether in relation to its startling composition, the contrast of the illuminated words against the Tehran sky or the hesitant body language of passers-by enlisted to hold the words for Changalvaee’s camera. Reading as a crescendo of Me, Body, Country, the series is a delicate probe into identity via the words that define us, revealing our– sometimes awkward – relationship to that which culture wouldhave us hold dear. She recalls: “People’s reactions to me asking them to hold the words added magic to the project. ‘What do you mean I have to hold Me?,’ they would ask.”

For some time, Persian typography and single words became Changalvaee’s paint, her chosen medium and her point of entry into developing a fully fledged artistic practice. In a 2012 sculptural project called Mountains of Regret and Alas, the artist (literally) elevated words into 3D pedestals, creating a vantage point for a better view into the scale of the significance – both real and imagined – that they convey.

Then came America, which changed things for Changalvaee. Two events in particular stand out. In 2013, the artist was admitted into Yale’s graduate programme in sculpture.  During peer reviews, she realised that an entire new set of viewers did not interact with her work in the same way she did by exploring the relationship between form and meaning. “To them, the Persian script was form devoid of content – alien forms even.” This not only stood in opposition to the premise she was operating on as an artist, but also restricted the reach of her work to an appreciation of external beauty, and all within a programme that posited sculpture, in Changalvaee’s words, as “materials that can generate meaning.” “Sculpture could be performance, anything that interacted with time and space. Something that redefines the discipline. In this context, my use of Persian words felt cramped. I had this thing that was dear to me, but I had to let it go,” she admits.

The second event was her discovery of Home Depot. The seemingly unending rows of plaster, acrylic paint, cementand other aquarelles gripped the artist, who had never yet considered putting medium before concept. “As an artist, I can let Home Depot dictate my interest and my choice of materials or I can visit the depot on an urge to find a material that I need to create,” she explains. In the aftermath of the realisation of this paradigm, ‘interest versus urge’, Changalvaee migrated to organic materials, stuff that brought her back to something original and primal – materials that didn’t force themselves too much but “might have been found lying at the bend of a dirt road on a forest walk,” as she explains. Originating in nature’s cradle, clay may have – unbeknownst to her – given the artist the grounding required to re-root her cultural heritage in a less (typo)graphic and more universal language. Inspired by Persian folk talismans – objects imbued with powers by whispering spells onto them– As Long as it Casts is an ongoing production (since 2015)featuring clay tokens imprinted with her own teeth.

“Today I find myself oscillating between two ways of thinking about material,” she confesses. “Coming from Iranian culture which is steeped in faith, I think about embodiment of desire, that anything you wish for, you can have. At the same time, I also experience the opposite here: what you want, you have to build for yourself. Ironically and urgently for me, art-making unifies both these ways of being.”