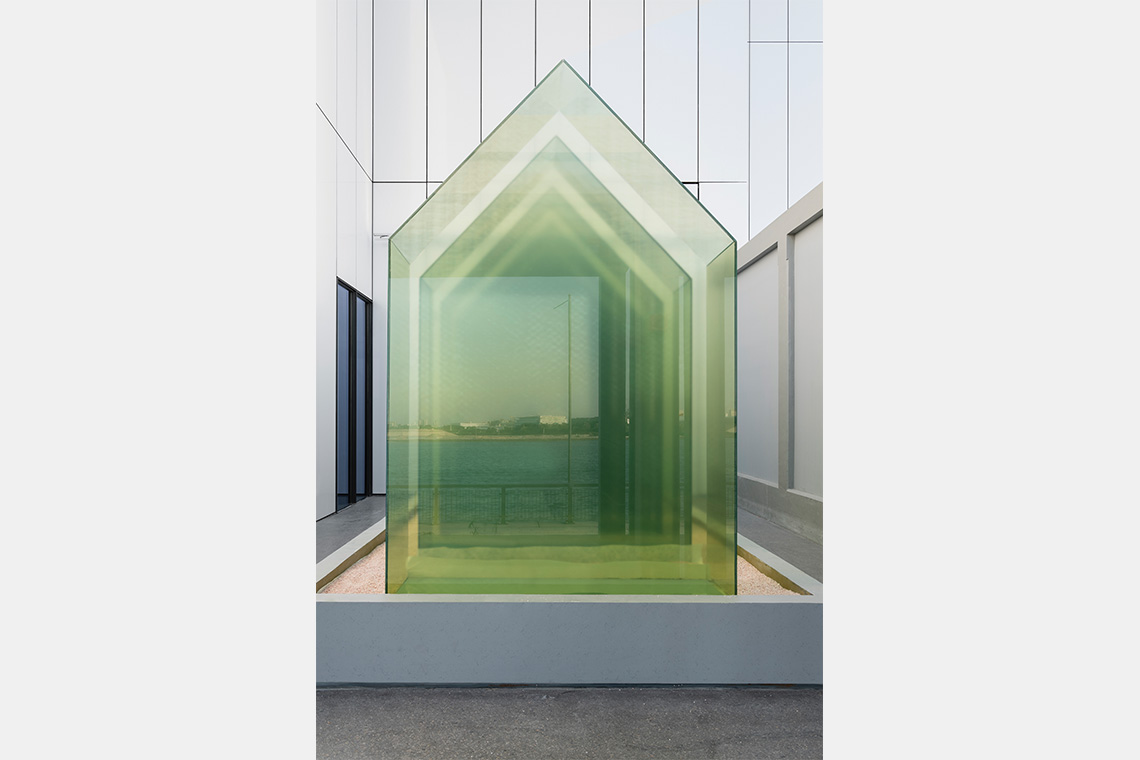 Shaikha Al Mazrou’s work has ranged from ephemeral land art in Ras Al Khaimah to a segmented glass (green)house at Jameel Arts Centre. As an artist, she strives to dismantle the tenets of sculpture by digging deep into the rawness of material. She achieves this by stretching and manipulating physical properties to the extreme, as demonstrated by her recent Lawrie Shabibi solo show, for which she welded industrial sheets of metal into surprisingly playful, fluid and flexible structures.

The first time I came across Shaikha Al Mazrou and her work was over a decade ago, in April 2007, when she was still an undergraduate at the College of Fine Arts, part of the University of Sharjah. Since 2003, it had been offering the only dedicated fine art undergraduate course in the country and Al Mazrou’s works of stripped-down yet multi-coloured computer motherboards made a particular impression on me when I visited the campus.

Soon after, Al Mazrou became part of the first batch of Young Associates of Art Dubai, a group of motivated students who advised on programming. These were heady days, when galleries were frantic to discover new Emirati artists. What I have always appreciated about Al Mazrou is her capacity to stay grounded.

After graduating, during a time when she was still looking into the concept of the readymade and assemblage of industrial parts, she went to London for an MFA in sculpture at Chelsea College of Fine Art. It was here that she took her practice to the next level, influenced by conceptualism and minimalist artmovements. “At Chelsea, I realised how vital the element of tension was to be in my practice,” Al Mazrou recalls. As she was struggling to give form to her ideas in her first tutorial, her professor encouraged her to treat the cast-off sections of canvas as an artwork. So, she tacked folded segments of blank canvas to the wall and made a fresh start. “I learned how to be uncomfortable and how not to be complacent in my work,” she continues. Her creativity derives from this sense of uncertainty. With a refreshing irreverence, Al Mazrou’s explorations of material contradictions and instability sit at the heart of her practice, which plays with physicality and illusion, weight and void, volume and surface. 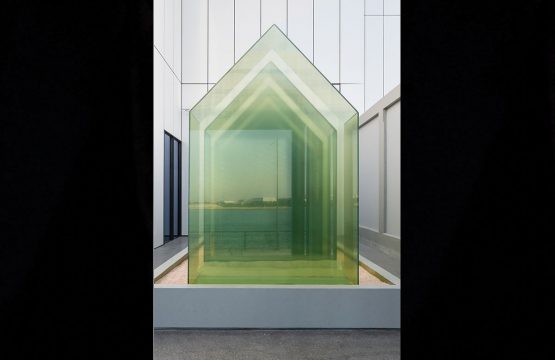 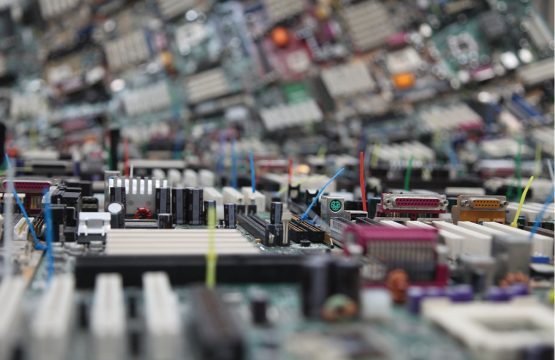 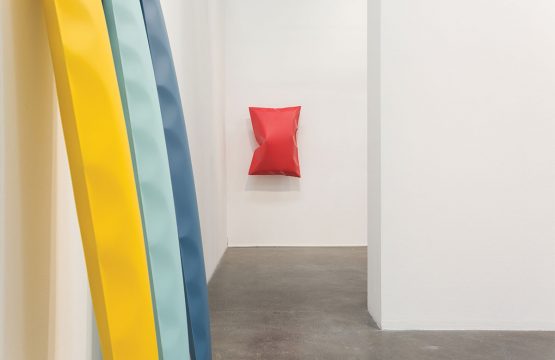 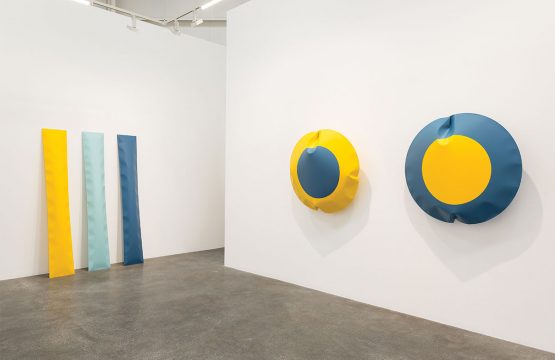 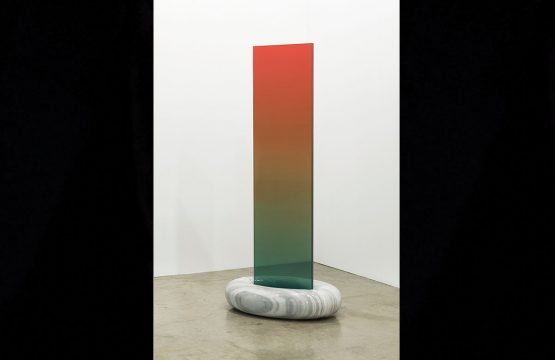 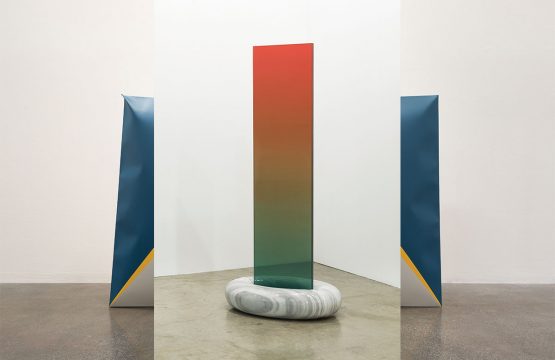 Sand-Land, commissioned by ADMAF for their exhibition The Art of Nature, took Al Mazrou into the desert and the sphere of land art in 2017, where, inspired by icon Robert Smithson, she carved spirals into sand and gravel in a work that will ultimately fade with time. Possibly the most significant commission was Scales, the result of an eight-month mentorship by Mohamed Kazem and Cristiana de Marchi. The pillar, displayed in the atrium of Abu Dhabi Art in 2017, was a layering of ten different materials (including marble, cement, rubber, copper), each allocated a space related to its specific weight by using the Fibonacci mathematical sequence. Also recently, Cast Documents, commissioned for the March Project at Sharjah Art Foundation, was a display of four stacks of A4 paper cast in brass, copper, iron and aluminum: a telling commentary on the bureaucracy of the art world and the weight of materials.

It is no coincidence that all these projects developed in the UAE. After completing her studies in London, Al Mazrou had made a decision. The same one Hassan Sharif had taken 30 years earlier – to go home and make a difference in the arts scene – returning to Sharjah and in Al Mazrou’s case, taking up a post as a sculpture lecturer. She talks openly about the influence Sharif has had on her. “Whereas he had to represent his own ‘school’ in a sense, we had the college already set up [as a foundation]. I felt it was my duty and responsibility to continue the lessons learnt from Hassan’s generation, to educate and push perspectives here in the UAE.” What being a part of an academic community also gives her is an enthusiastic, informed audience: her work only comes alive in the interaction with the viewer. Her dream is to establish a Bauhaus-type academy in the UAE, somewhere between a foundry for production and an artist community.

One organisation that exemplifies this ethos by incubating talent, cementing community and presenting site-specific works is the newly opened Jameel Arts Centre, for which Al Mazrou created Green House: Interior yet Exterior, Manmade yet Natural as the first Artist’s Garden commission. It both plays with the dichotomies reflected in the title, as well as different gradients of green. As part of their growing collection, the sculpture will move to other outdoor spaces around the centre. Al Mazrou is interested in the different perspectives the work can have, particularly in terms of light and shadow.

As we looked at a scale model in her studio, with small samples of coloured glass set against her floor-to-ceiling windows, she explained the difficulties she had in manipulating the material and maximising its possibilities, especially with the 45-degree angle needed for cutting it. By inserting a film between two glass plates, she was able to give different hues to the disconnected glass sections. “I’m not a painter, so colour

doesn’t come naturally to me,” the artist admits. “You need to listen to the materials and then break the rules!” Her studio – in an annex of her Jumeirah home – is full of this energy and includes more recent pieces, in which the artist juxtaposes marble with manipulated steel forms in vibrant red and turquoise.

Expansion/Extension (ended 1 November) at Lawrie Shabibi marked the first time that glass has appeared in Al Mazrou’s work and was also her first solo show. It included Exhale, a large 100kg glass sheet that gradually morphed in colour from red at the top to green at the bottom and was sandwiched at an acute angle between two bulbous white forms (made of wet coated steel). These appeared unusually soft and malleable in a show of hanging and freestanding sculptures that seemed to pulsate, bulge and recede in startling crumpled, folded, pinched forms and bright primary colours.

Another work, Fragile Equilibrium, places a similar glass sheet upright, precariously held in place by a rounded marble structure. “I like to familiarize myself with different materials by first getting to grips with one, fully understanding what it is capable of and then pushing its boundaries to the maximum, sometimes even further than I expect,” she explains.

Playing with preconditioned ideas of weight, balance and texture have been core preoccupations for Al Mazrou since her captivating works Tension II and Relax, for which she received the MFA Student prize at Chelsea in 2014. The first a slingshot, taut and ready to go, the second in repose, they depicted two different moments in time. And now Al Mazrou has outdone herself again with art objects that seem to defy the laws of materiality and gravity.