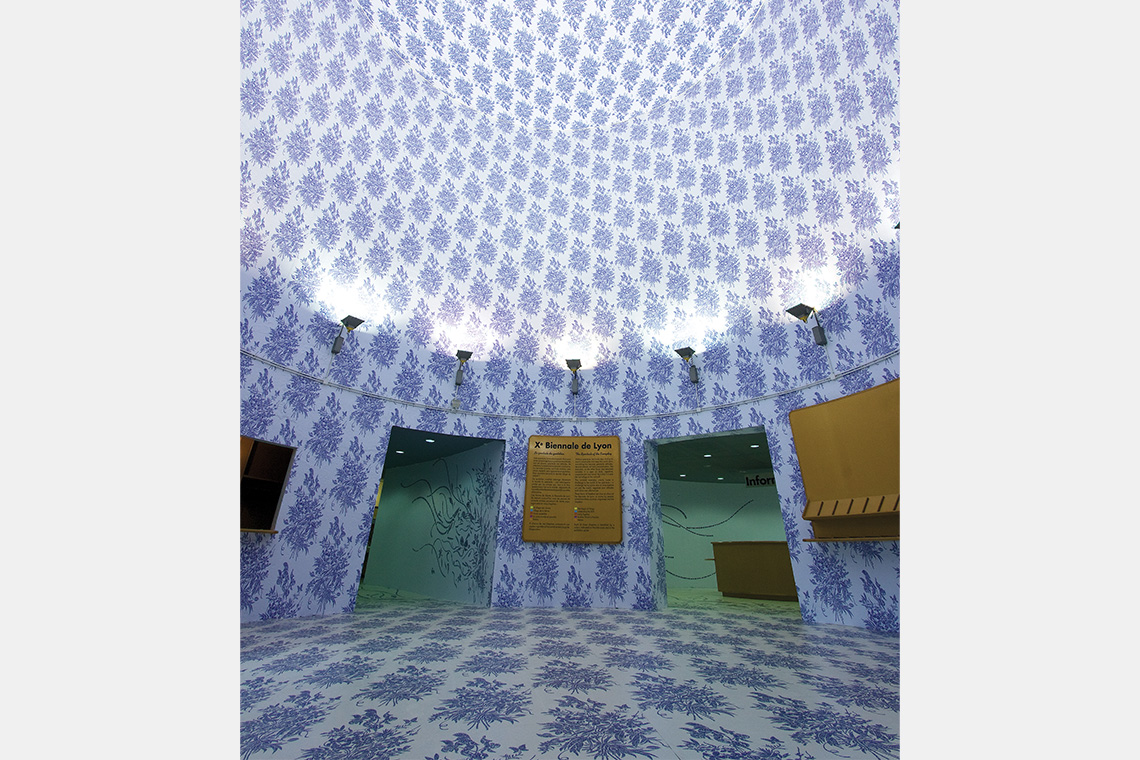 In the End is the Word

For Chinese contemporary artist Tsang Kin-Wah, language is both tool and medium. His immersive installations have sentences swirling up into dramatic storms across rooms like moving projections of vines or snakes. Inspired by the sacred and the profane, he marries text with technology, the visual with the philosophical. Katherine Volk chats with the Hong Kong-based artist about his work.

From the minimal to the extravagant, from handcrafted words on paper to climbing text enveloping entire museum facades, Tsang Kin-Wah animates language through his art and has done so since the 1990s. Drawing from religious texts and nihilistic philosophy, as well as films and popular culture, for this artist, text is both something that can be read and a ‘visual sign’ of more profound significance.

In 2015, Tsang represented Hong Kong at the 56th Venice Biennale with The Infinite Nothing (2015), inspired by Nietzsche’s proclamation in The Gay Science (1882), ‘Are we not straying as through an infinite nothing?’ An adaptation of the work, Nothing, was presented in Hong Kong a year later and was my first encounter with Tsang’s art. Brought together by a running theme of existential angst, as well as visual and textual references to Shakespeare’s Macbeth, Stanley Kubrick’s A Clockwork Orange and the rock band Nirvana, words swarmed across Hong Kong’s M+ Pavilion, intensified by mirrored surfaces. Viewers were caught up in the swell of text and a general sense of anxiety as the narrative slowly crept across the walls to the distorted sounds of Kurt Cobain’s guitar and then sped up in a frenzy before coming to a complete stop. Here was an artist in complete control of his audience.

We meet in a crowded café, where Tsang appears cool and collected, despite the hot and humid Hong Kong summer. He is softly spoken, an extremely courteous and discreet man, not at all what you might expect of one who conjures up such overwhelming wordscapes of often morbid reflections. Though he began garnering attention in the early 2000s with pretty wallpaper designs in the form of 19th-century-inspired floral patterns that belied their latent content – arrangements of a disturbing litany of insults in English and Chinese – his work has since shifted to video, namely with The Seven Seals Series (2009–ongoing). A reference to the Book of Revelation and the Biblical notion of the seven symbolic seals that secure a scroll (when broken, devastating consequences ensue), the words in this work loop with no beginning or end, floating in projections of philosophical and religious imaginings of an apocalyptic world. On a personal level, they relate to the artist’s Buddhist upbringing, his Christian conversion and subsequent disillusionment with faith. But the text also suggests global issues such as war and revolution as ongoing cycles and a certain inevitability of the human condition, referencing Nietzsche’s notion of eternal recurrence. 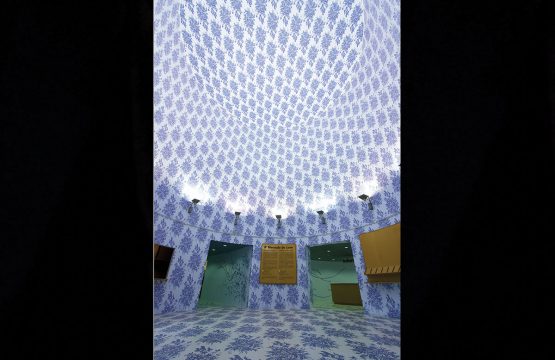 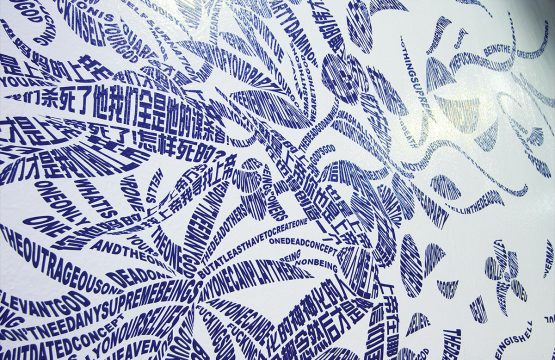 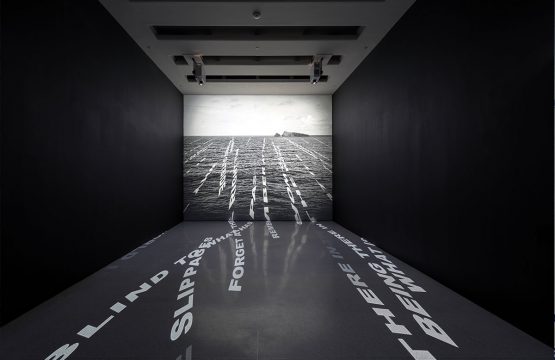 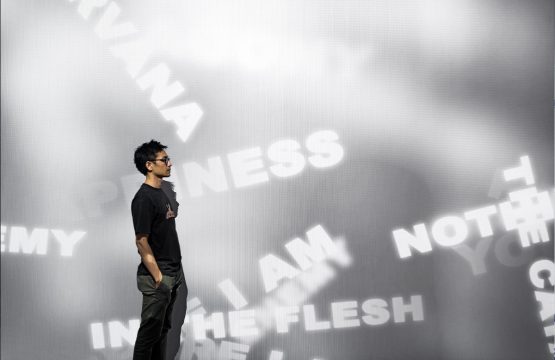 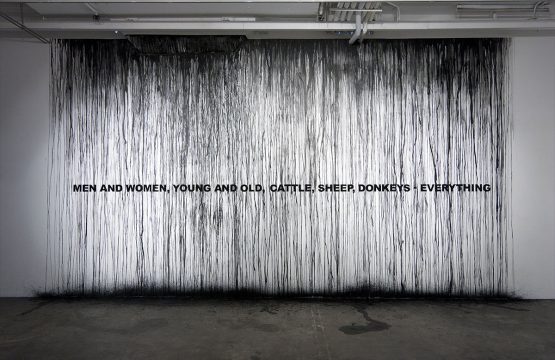 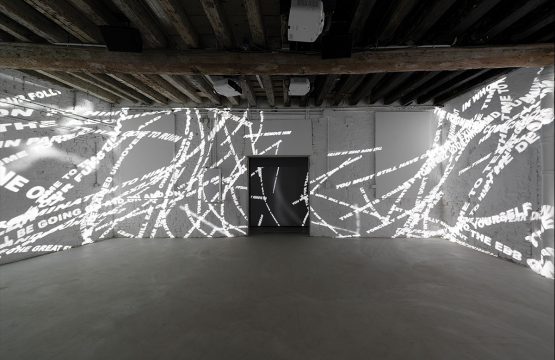 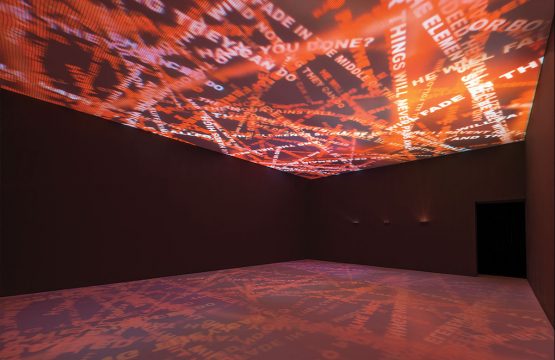 “There are two types of text,” says Tsang, “which I would define as passive and active. The passive form is the one you just read; it’s the title of a book or article. Its surface functions as text that provides content to you… But active text is one you realise as a visual sign, and it tries to play with those elements and properties… For me, when text changes from passive to active, that is the point at which it becomes art.”

Most of Tsang’s work transcends cultural boundaries and defies a singular narrative. The fourth part of the Seals series, The Fourth Seal– HE Is To No Purpose And HE Wants To Die For The Second Time,shown at the 2010 Aichi Triennale in Nagoya and more recently at the 2016 Istanbul Biennial, is a vertiginous expression of struggle, vanity and power, ascent and descent in an overarching quest for spiritual belonging. Other site-specific works take on more local issues like racism and discrimination towards migrant Chinese populations, as with Either/Or (2017) at the Vancouver Art Gallery. The playful, aesthetic nature of the vine-like words on the gallery contrasted with the actual content: the disenchantment with daily life and the deep wounds of communities.

The visual aspects of Tsang’s language have evolved, but so too has the textual form. He has become increasingly active on the global stage, using both Chinese and English in his text-based works but has also moved to just English in his video installations due to the complexity of Chinese characters. “I also decided to use Englishbecause it is my second language, so in some way I can keep a distance from the language and content.” The tone has shifted from the erstwhile profanities to literary references and words of wisdom. With a mischievous look in his eye, he admits that, “There was a time when I was using swear words a lot because it’s something local, rather temporary and radical; they try to challenge authority and power. But then some teenagers told me it was a little old-fashioned. Now I feel that foul language has an expiration period. I think, some years after I’m gone, it will be again something rather different because language keeps changing.”

Perhaps surprisingly, some of his works incorporate explicit figuration, as with the La Petite Mort series (2011–2015) and his subtle (as in, barely visible) but highly graphic Porn Painting series (2009). He has alternated between the two methods (image and text) in a constant cycle of experimentation. Since images don’t have the same visual clarity of text, he claims they offer greater possibilities and more room for interpretation. But instead of isolating image from text, hiscurrent practice now integrates both. “After some time, I realised that the two directions can actually mix together, which is what I am trying to now work on in the studio.”

Tsang’s recent commission at New York’s Guggenheim, In The End Is The Word (2016), demonstrates this by merging found footage with text in an immersive sonic environment. It features the controversial Diaoyu Islands, also known in Japan as the Senkaku Islands, an archipelago that China and Japan both lay claim to. A calm ocean is disturbed by unidentified passing boats, resulting in a confrontation between anonymous battleships. As things escalate, text streams vertically from the horizon and spreads across the floor, like water leaking and flooding the space in liquid language, only to be later submerged by a blinding white light. The title of the work refers to the prophetic outlook encapsulated by novelist John Steinbeck during his 1962 Nobel Prize acceptance speech: “St. John the Apostle may well be paraphrased… In the end is the word, and the word is man – and the word is with men.” Amen.