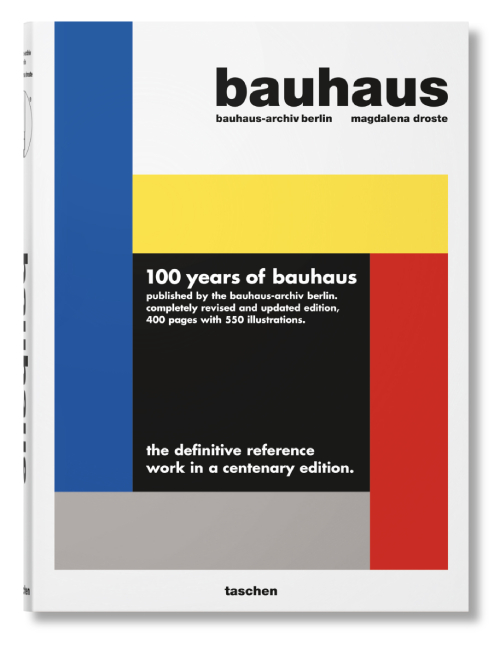 As it’s the centenary of the Bauhaus, to which a Bauhaus Imaginista travelling exhibition (to Japan, China, Russia and Brazil) and a new Bauhaus museum in Dessau are paying tribute, it’s also an apt time to review the school’s legacy. With over 250 preserved, original illustrations, 100 years of Bauhaus is considerably larger than any previous volume – and of an appropriate scale. Anything but arcane, the book serves as a chronological travelogue, starting with the 1919 founding of Bauhaus in Weimar to its dissolution under pressure from the Nazi regime in 1933.

Together, author Magdalena Droste and Wita Noack, director of the Mies van der Rohe Haus, walk the reader through the expansive 15-year history of Bauhausian existence. A radical art school that gave rise to the 20th-century’s most defining avant-garde movement, it set out to break down the barriers between art and design, combining form with function to produce accessible but artistic everyday objects. Set against the backdrop of World War I’s political and social turmoil, the Bauhaus became a laboratory of artistic experimentation more than a refuge for creativity, reviving a sense of national pride and joie de vivre following the devastation of war.

In addition to focusing on the lasting legacy that profoundly defined our visual codes, the book also highlights the rather intangible values of Bauhaus heritage: future-facing, aspirational and utopian. After all, it is Walter Gropius, the founder of the Bauhaus school, who issued the rallying cry: “Together let us call for, devise, and create the construction of the future.”