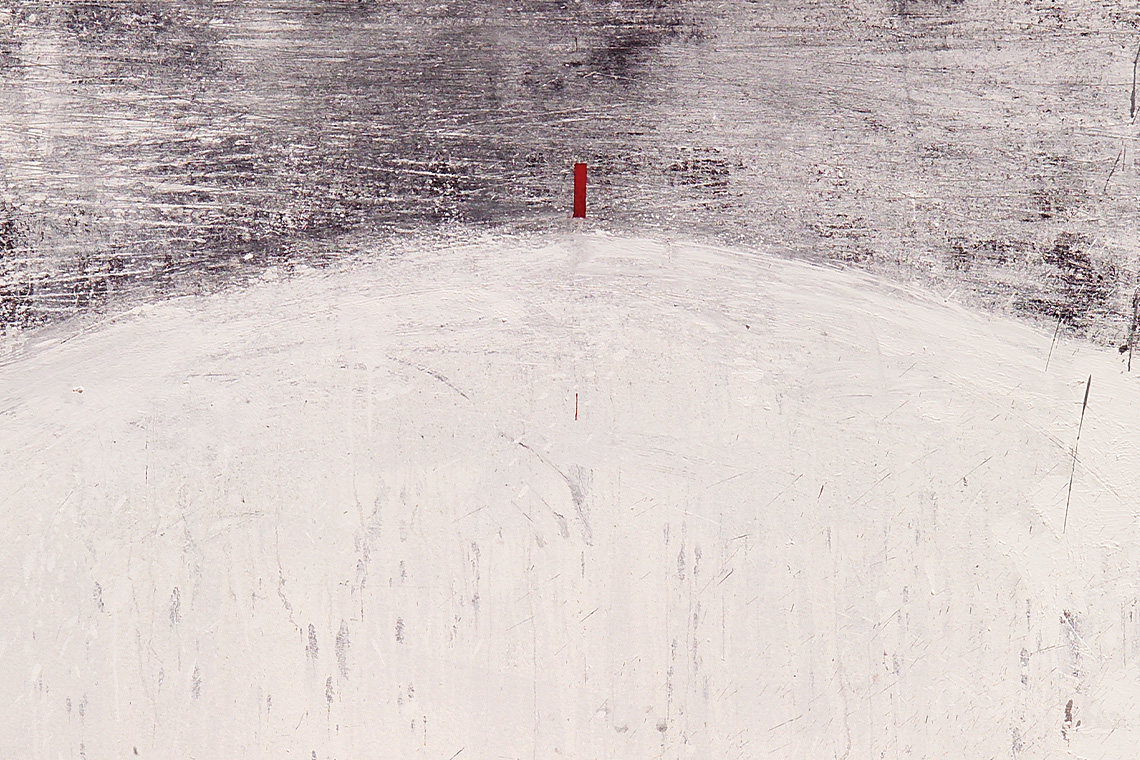 With a constantly evolving method, Tammam Azzam recalls the beauty of his native Syria, rebuilding its broken pieces with complex techniques. Marina Iordan assesses what places him at the forefront of contemporary Arab art.

Tammam Azzam’s increasingly abstract mixed-media works, in all their depth and textural intricacies, narrate stories of his homeland, both before and after the uprising. With assemblages of found objects, digital works and, more recently, a renewed interest in painting, he tells his pain, isolation and helplessness in the face of the current Syrian conflict. Born in 1980, he began his relationship with art in his childhood years, toying with watercolours and paper. From the age of 15 it was very clear in his mind that he would be an artist. “It was my dream,” he recalls. “This, and nothing else. My childhood in the south of Syria was a culturally bleak one, without books or Internet. I had never seen Damascus.”

With the unconditional support of his father, a renowned novelist, and his mother, Azzam left his native Sweida. At the age of 18, he discovered the Syrian capital for the first time, with all the noise, lights and bustle that make a big city. Although a contrast from his hometown, it became evident to Azzam that he belonged to the metropolis.

The most influential person during Azzam’s student years at the University of Damascus Faculty of Fine Arts was his teacher Safwan Dahoul, a former student at the same university and already a leading figure in Syrian art. During his doctorate years in Belgium, Dahoul had realised the importance of finding his own artistic style, and recognisedthe same anti-conformist talent in his student. “I wasn’t receiving good grades in oil painting because the Modernist vision of my teachers was clashing with mine. Safwan discovered me, understood and supported me. Until this day, I remember how he took me to the university’s store, offering that I take as much paint as I needed, breaking the rules of quantity restrictions imposed on other students. He encouraged me to create my own art.”

After graduating in 2001, Azzam attended several workshops in Jordan under Marwan KassabBachi (page 106), the renowned Syrian painter who had been based in Berlin since the 1950s. “Marwan changed me. He came from the European scene, with a different mentality when it comes to teaching art. He is the one who inspired me to work with watercolours at the end of my studies.” Following Marwan’s influence, Azzam created abstracted visions of everyday objects, decomposing chairs or kitchens to their simplest form. Allowing watercolours to spread outside the predetermined pencil lines, he infused motion into still objects.

Since then, the exploration of media has been a constant for Azzam, influenced by each episode of his life and leading him to the discovery of new techniques. In his first job at a paper store, he examined the material in all its varieties: quality, thickness and its reaction to liquid. From thisexperience were born his experiments with ink on paper in 2004, as a preamble to his Horizon series. For almost 20 years, Azzam had watched Sweida’s horizon from the windows of his parents’ house. Reminiscing on these childhood sights, he started Horizon in 2007. His abstract works highlight the flatness of the landscape, allowing a clear delimitation between land and sky, a thin line between the ashy lands of an old volcanic area and its morose sky. Here and there, the careful horizontal compositions of black and white are interrupted in their colour neutrality by splatters of red, allegorical of the scarecrows that were omnipresent throughout the vast fields surrounding the area.

In the years that followed, Azzam left the paper store and began working in a silkscreen shop for clothing labels. This led to the discovery of a new medium, which was later employed as the backdrop to one of his most recognised works, the Laundry series. A continuity of his previous Horizon explorations through the evocation of lines, Laundry investigates the randomness of objects and their placement. Observing his daughter play with clothes pegs on a washing line, Azzam reconstructed the scene on canvas, first with three simple lines and pegs disposed on them. Progressively, the series evolved into assemblages of mixed media. The key to this transformation was an increasingly abstract style, paired with the introduction of three-dimensionality. From lines drawn on canvas, Azzam went to stretching wires across a wooden boxed frame and shaping cloths found on the street to acquire the desired forms on the washing line.

A great deal of Azzam’s work stems from memory. During the years of his mandatory military service on the outskirts of Damascus, his Metallica series (2010) emerged from solitude and of longing for the city, its high buildings and the comforting buzz of busy streets. Azzam imagined seeing Damascus again from his window, and started recomposing the city with graffiti-like stencil images of buildings sprayed onto canvas, where the white acrylic drizzle creates a vivid impression of morning mist rising above the transmission towers and satellite-covered rooftops, until it blends with the clouds. Although briefly interrupted during his military service, when the loneliness of his environment was not conducive to further exploration, Laundry resumed its course in 2011, with the introduction of silkscreen backdrops representing Damascene buildings. Mixing realism and abstraction, Azzam hinted at the first days of the uprising, when mothers awaited the return of their children from school, anxiously pacing on their balconies between the washing lines. 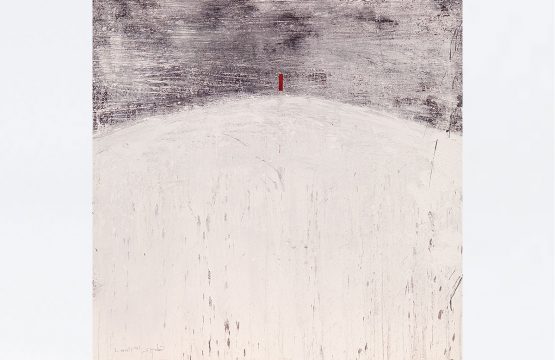 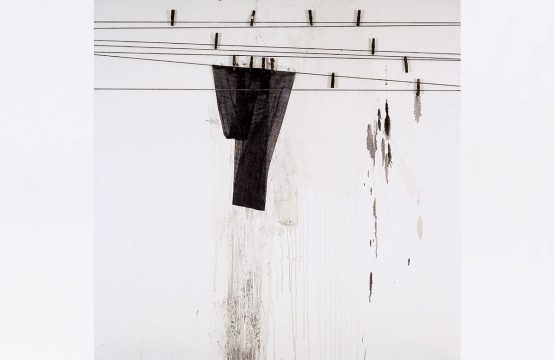 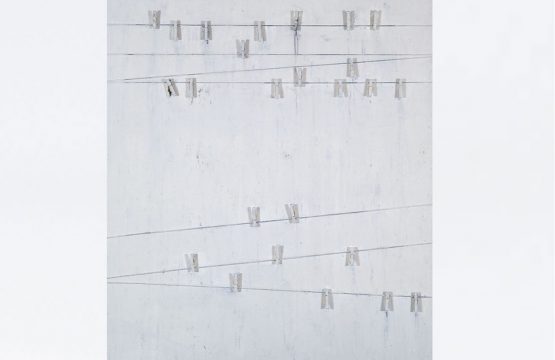 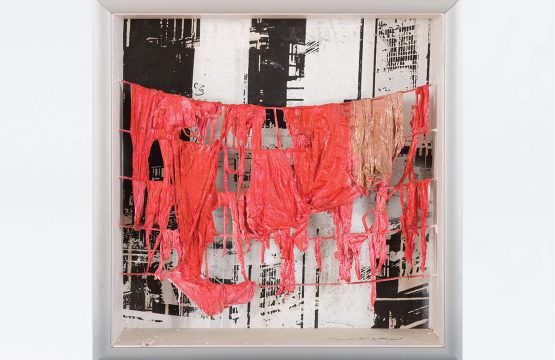 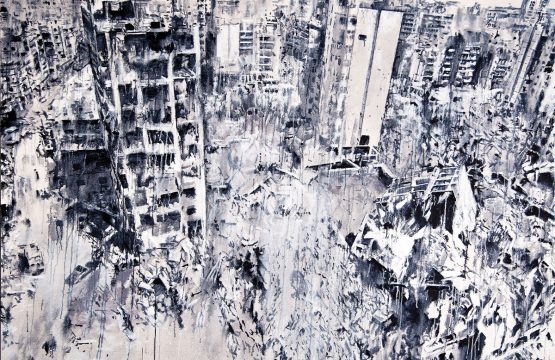 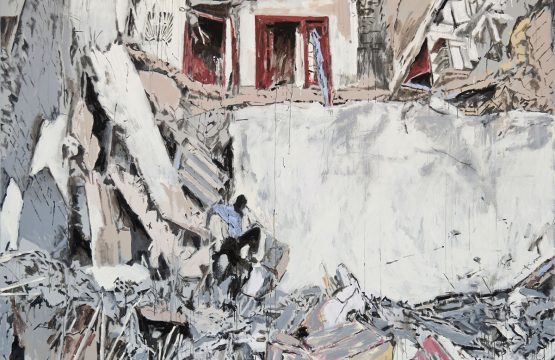 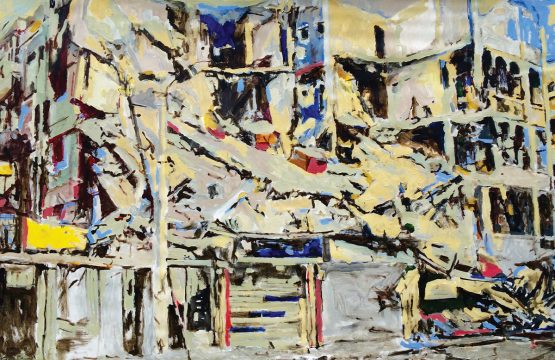 With the uprising and its increasingly unsafe environment, Azzam and his family relocated to Dubai. After this drastic change of surroundings, Azzam stopped painting for two years. “Because to paint, you need to feel settled in,” he explains. He took on the role of graphic designer, which again led to personal experimentation with digital work. Out of it came his most recognised series, Syrian Museum (2013), in which he superimposes emblematic artworks by European masters onto photographs representing Syria’s war-torn buildings. The juxtaposition of humanity’s greatness with its ability to kill and destroy had an overwhelming impact on all audiences. One piece in particular, showing Gustav Klimt’s The Kiss on a decayed facade, went viral on social media in mere days and gained Azzam international recognition. With this worldwide exposure came the label of ‘political artist’, one with which Azzam is not comfortable. He is, first and foremost, an artist. To him, reporting the devastation of his homeland is an unavoidable duty rather than an artistic choice.

With the exception of Syrian Museum, the declination of greys was a constant throughout Azzam’s work until his move to Germany this summer, following which an evident chromatic transition occurred. “I can’t use green because I don’t know it. I haven’t seen it before,” he used to say. Storeys(2014), his most recent body of work started in Dubai, is the perfect embodiment of his artistic metamorphosis. At its inception, shades of grey dominated the imposing structures, representing destroyed buildings in the environs of Damascus. Since his relocation to Europe, the quasi-omnipresence of blue, red, green and yellow hues adds further depth to Storeys, while the underlying concept remains the same: the series narrates how damaged Syria is today, how much of its heritage has been lost. It reconstructs what has been torn down and abandoned, floor by floor, to bring the country back to existence.

Often unconvinced by his architectonic result, Azzam over-paints his canvases and starts from scratch again. This exigency is something he learnt from Marwan, who used to tell Azzam that he “should build the face, then destroy it, and rebuild it again.” Alternating between full views and close-ups, Azzam supplements his large-scale paintings with theatrical site-specific installations such as a rubble-filled staircase atop which a mirror reflects its viewer. In so doing, he transforms the spectators of his works into witnesses of Syria’s devastation and confronts them with the reality of what life is like under less auspicious stars.
Tammam Azzam’s increasingly abstract mixed-media works,