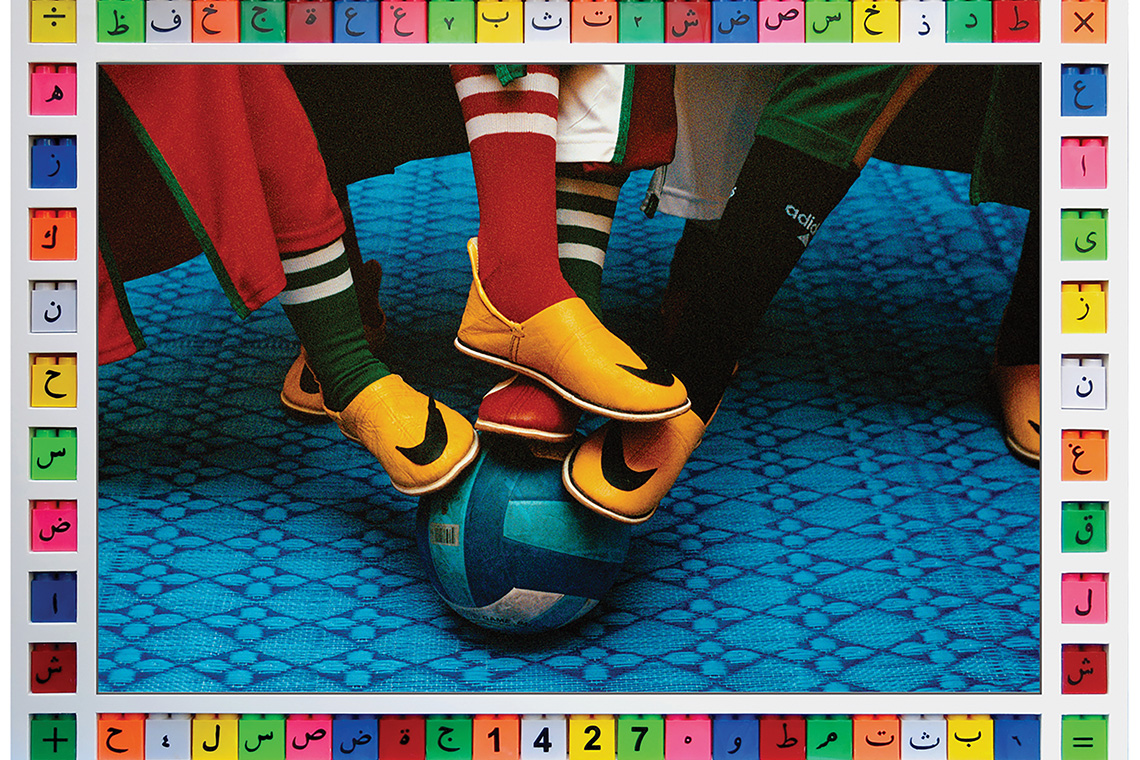 Moroccan-born Hassan Hajjaj is best known for his graphic visual language and a Pop Art tilt. The rich patterns of his vivid, staged portraits framed by textures and brands sit somewhere between art and commerce. The versatile and self-taught artist settled in London in the early 1970s, where he made a name for himself first as a fashion stylist. Anna Seaman pays a visit to his design shop-cum-studio to discuss his Warholian-style oeuvre that includes installation, performance and recycled Coca-Cola crates.

Entering Hassan Hajjaj’s shop on a surprisingly quiet and leafy street in the middle of London’s fashionable Shoreditch district is like stepping into a three-dimensional version of one of his iconic portraits. The first thing you notice is the colour. Then, the sheer range and scale of objects crammed into the small space. As your eyes take it all in, they rest almost subconsciously on the familiar. The red-and-white cursive script of Coca-Cola is instantly recognisable, despite the fact that the words are in Arabic. The Nike swoosh, instead of being emblazoned onto sportswear, is sewn into pairs of Moroccan leather slippers stacked up in the window. It is a small alteration, but one that makes this traditional footwear instantly cool. The jars, cans, bottles and tins bearing distinctive logos that populate Hajjaj’s shop are the very tools of his trade. For he is well-versed in the power of the language of branding.

“The strength of advertising is enormous,” he says. “I use cans in the frames of my photographs and people don’t even look at the image. The first thing they see is the logo, the brand. This is how our brains have been wired. For me, branding is a language that communicates with people around the globe and which draws them in. I am fully aware of that – my hope is that after I have gotten their attention, they might learn something new.”

As I visit his shop on a sunny summer afternoon, I ask him how he feels about his relationship to Pop Art. Coined in the 1950s and nowadays personified by Andy Warhol, it emerged as a movement with the globalisation of pop music and youth culture and, by its very nature, was anti-establishment. 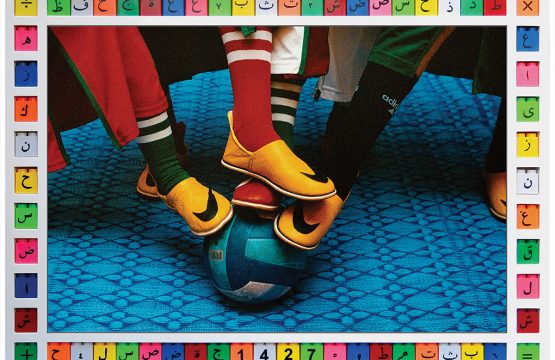 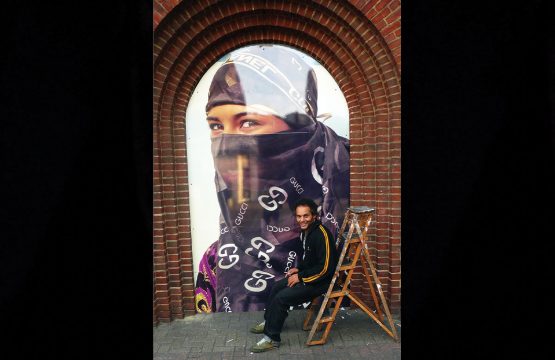 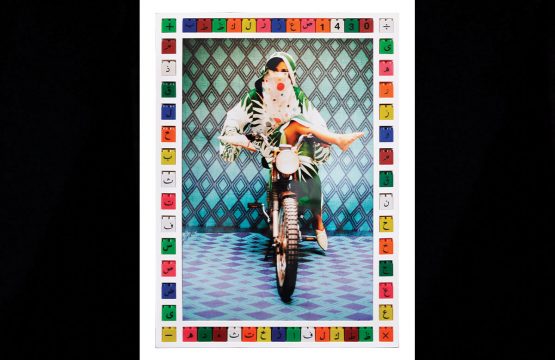 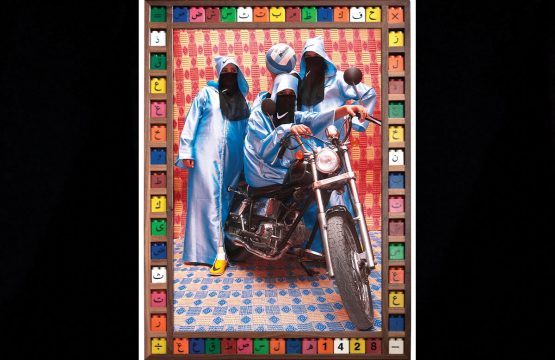 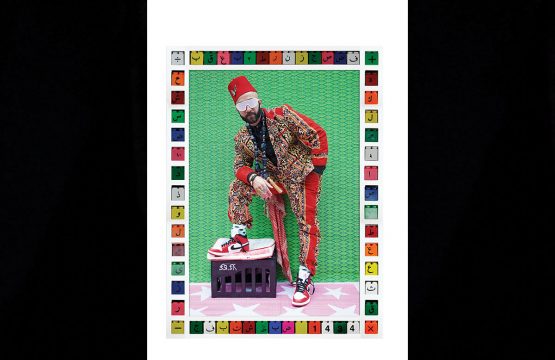 Although Hajjaj is practising more than half a century later and has no desire to be compared to or, indeed, contrasted with Warhol, he is playing on similar tropes and is certainly about keeping art out of the stuffy and sterile realm of the gallery.

“I am a child of the 60s so I grew up with the new wave of consumerism,” he muses. “But I also come from the counterfeit culture that sprung up in London in the 1980s. We could never afford the real thing. My work represents that in a way, the struggle and the striving to become part of the mainstream. I like to think of my art as being for the people and about the people.” It is this kind of democratic approach that can be compared to Warhol’s famous appropriation of Campbell’s soup cans. They were what Kirk Varnedoe, a prominent American art historian, referred to as a “steady common denominator” – culturally relevant across every age and class. By opting for Coca-Cola iconography and other mega brands that transcend language, Hajjaj is resorting to the shared experiences that connect audiences living in the image-saturated world of the 21st century.

He is also taking it further, by using this reappropriation as the hook that tells his own story in an attempt to demystify and humanize his culture and North African heritage. Blurring the lines between Western consumerism and Arab identity,between object and image, he photographs an Arab model wearing a Louis Vuitton scarf fashioned into a niqab in Eyes On Me (2000), for instance, or renders the aforementioned Nike Moroccan slipper into a football boot in Feetball(2006) to make multiple statements. On one hand, the Arabisation of well-known brands can be seen as turning global Western cultural hegemony on its head in an implicit critique, but it can also be interpreted as the Arabisation of non-Arab or foreign products. Ultimately though, Hajjaj is interrogating a hybridity of which he is a product. With a thick British accent and a street style that is completely at home in the uber-cool district of East London where he lives and works, he embraces both the home he has made and the place he is from. As we chat, he takes a call from Morocco, immediately shifting to the slang of his country and then, after lunch, which comprises a salad and a beetroot juice from the vegan café across the road, we discuss his shop.

“I didn’t plan it, it just evolved,” he shrugs. “I opened it as a studio, a gathering place and a shop, but really it is a place for me to connect and keep in touch with people. The way it has developed makes me think it has its own personality.” Which it does, though the character of the place reads as an extension of the artist’s. Its open and vibrant atmosphere makes you feel immediately at home and also dazzled by the myriad influences simultaneously at work in a creative chaos.

Arabic script is found in all corners of the space and in some images, filling the frames of his subjects, such as with the Arabic characters embossed onto Lego-like blocks comprising Feetball’s elaborate frames. But in terms of all the script in his work, Hajjaj is not concerned with the meaning behind it. He is instead interested in what the combination of letters, colour and graphic design symbolize for us in the age of globalisation. Rather than placing emphasis on the text, it is the visual signifier of the Arabic lettering that takes precedence. In other words, it’s graphics over content in a fusion of visual languages.

I end our conversation by asking what word he would choose if he had to photograph only one as a portrait. He said it would be love. Ultimately, regardless of the notions of cultural otherness or linguistic difference that Hajjaj is exploring in his work, it is this answer that is most revealing about his practice and his very individual view of the world around him, and us.