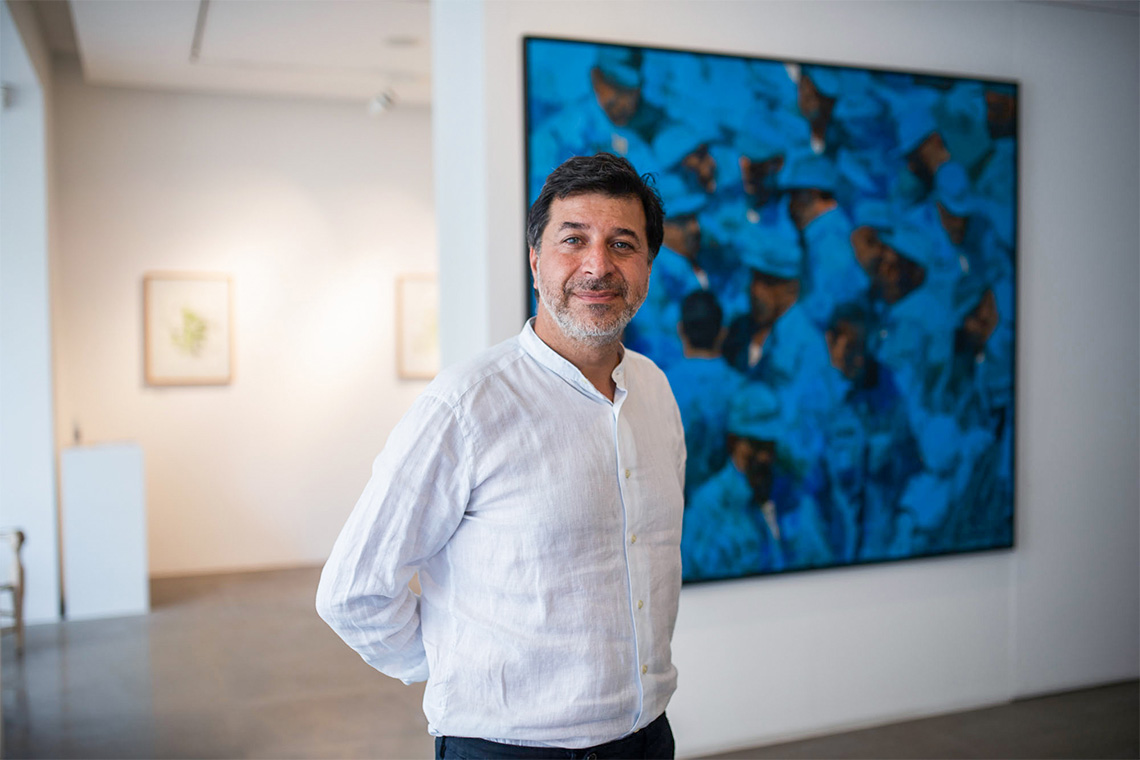 Founder of Agial Gallery and the Saleh Barakat Gallery

One of the most experienced and insightful figures on the Middle Eastern art scene, Saleh Barakat opened his first gallery just after the Lebanese civil war ended in 1991. He talks about the moment the sky fell down on him and why the explosion represents a watershed that Lebanese cannot afford to ignore.

Stay or leave?
I am staying Your dream for Beirut…
To remain as a platform for openness, diversity and the embracing of different cultures Beirut past…
A city of multiplicity that worked and was beautiful Beirut present…
A very tired city where fanaticism seems to triumph over humanity
What does it mean to be Lebanese?
We are the inheritors of a multiple identity, something for which we are suffering today but we will try to defend it
How will you move forward?
By carrying on with what we have always done: art and culture. This is our message to the world
How hopeful are you on a scale of 1–10?
I would say I’m at the number 3

THE EXPLOSION IN BEIRUT IS A CLEAR MESSAGE AGAINST THE IDEA THAT PEOPLE CAN LIVE TOGETHER, THAT TOLERANCE IS POSSIBLE, THAT MULTIPLICITY IS A WEALTH AND THAT DIVERSITY IS IMPORTANT.

Ali Y. Khadra: We’ve been through so much in Lebanon, how was this time different?

Saleh Barakat: For me, it was really very different. Beirut is a city built around a port and the most cosmopolitan parts of the entire country are in this neighbourhood. So its destruction has been a hammer blow to the role of Beirut as a platform of openness, multiplicity and diversity.

AYK: Where were you when the blast happened?

SB: In Daoura with Serwan Baran, one of my artists, visiting a client. Daoura is close to where the explosion happened and we were in the middle of the street at the time. You cannot do anything in that situation, there’s nowhere to hide – you just see things falling down onto you from above. It’s pure chance whether you’re hit or not. It took me a few minutes to realise that I wasn’t because, from my experience in the Lebanese war, when you are hit directly you don’t actually feel it immediately. As soon as I registered that I was alive and kicking, I started looking for Serwan. It was a very tense ten minutes before we found each other. 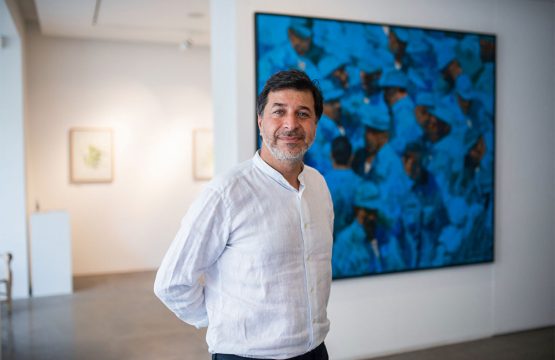 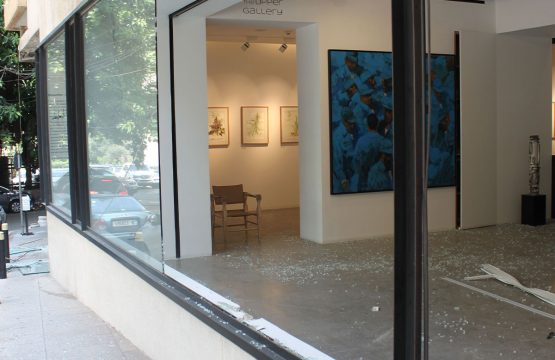 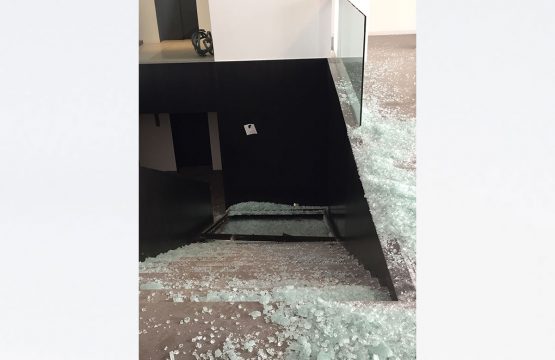 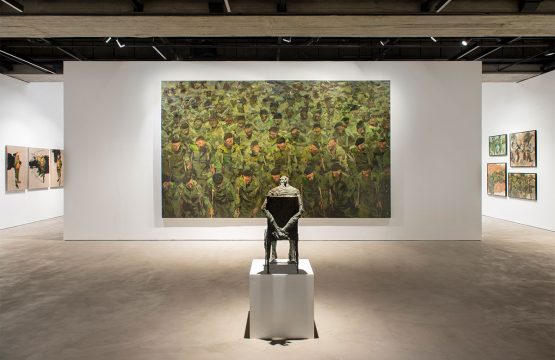 AYK: Like many people, you’ve suffered material damage, but you’ve also endured a very personal loss – that of Firas Dahwish, a much-loved member of the Agial Gallery family. What happened?

SB: Firas was my shadow for twenty years, I literally raised him. So, when I got a call saying that he was in hospital I immediately ran there. A huge window had fallen on him as he was on his way home, crushing his body, and for a long five days everyone was trying to save his life. But unfortunately we lost the battle. It was a significant experience for me because, even though my house and my gallery were heavily damaged, it wasn’t important compared to the great loss of Firas. All I was interested in was trying to save the life of this very dear person.

AYK: You have spoken about the great community response to the disaster and how your neighbours helped secure the gallery in your absence.

SB: Yes, I was very touched to see the unbelievable solidarity amongst the people, in contrast to the total absence of any government response. Instead of coming to help, the officials simply did nothing. There was no statement from the government body to say how sorry they were for this national disaster. The flags were not even put at half mast. It’s very disappointing, and I feel a lot of anger about this irresponsible attitude. On the other hand, the people themselves, especially the younger generations, have been incredible, and this is what gives us the morale to stand up for them today.

AYK: Do you think this is a tipping point for Lebanon? SB: Honestly, I really do. Something needs to change. In these times of Brexit, building walls

THERE IS SUCH A LACK OF WORTHWHILE LEADERS AND POLITICIANS IN THE WORLD, BUT THE ARTIST ALONE IN HIS OR HER ATELIER HAS THE CAPACITY TO CREATE AN EXPRESSION – A VISION OF THE WORLD IN WHICH WE WOULD LIKE TO LIVE – THAT CAN SNOWBALL AND REACH THOUSANDS OF PEOPLE.

and rising nationalism, and with so much fundamentalism and radicalism in the world, the explosion in Beirut is a clear message against the idea that people can live together, that tolerance is possible, that multiplicity is a wealth and that diversity is important. This is what Beirut has always represented for me. AYK: How important is art at times like these?

SB: The only way for those of us in the art world to make change is through our creativity. There is such a lack of worthwhile leaders and politicians in the world, but the artist alone in his or her atelier has the capacity to create an expression – a vision of the world in which we would like to live – that can snowball and reach thousands of people. You cannot hide the emotion coming from an artwork.

AYK: Speaking of emotions, you held a very powerful and profound show earlier this year.

SB: Yes, A Harsh Beauty by Kurdish-Iraqi artist Serwan Baran, who I was with at the time of the blast. It was about the ordinary people, who always suffer humiliation, despair and invalidation, while politicians talk about glory and about how things are great when they’re clearly not. This is his message – and only a great artist is able to carry this idea forward for future generations, hoping that they don’t make the same mistakes. But they always do; this is the story of mankind.